GoodReads Summary:
It started with a lie. A night of blurred lines between a teacher and a student.
I wasn’t her student, yet it was the single most defining night of my life.
I’ve never been the man she thinks I am.
Most people have no idea about the life I’ve lived or the words that ring true when it comes to me—still waters run deep.
But you’d be hard-pressed to find a coed on the TGU campus who knows otherwise…because I’ve never corrected them.
The clock is ticking down, it’s Fourth and Inches with the ball inside the one-yard line and the focus is on me, The Guy on the Left. I’ve never felt like a football god, inside I’m…just Troy.
It’s time to set the record straight.
For my son, I‘ll find the strength.
In her eyes, I’m determined to gain redemption.
I will have them both, even if I have to take my eye off the ball. 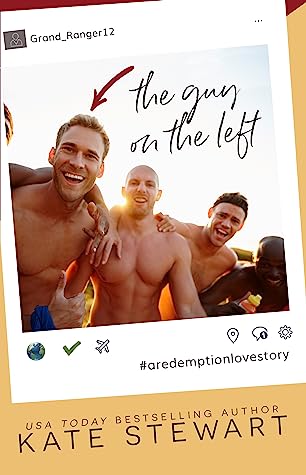 Review:
After finishing the first book in this series, I was really excited to continue the story and hear more about Troy’s story. Right from the beginning, I was interested, but also sort of annoyed. Because we got to see an outside perspective from the first book, it was a little annoying that certain aspects weren’t really shown in this book. I’ll explain what I mean in a bit.
Troy is trying to show Clarissa that he’s grown up and isn’t the teenage boy that lied to her about his age anymore. I loved this aspect of the story. I really loved that Troy was so serious about stepping up and being a father to Dante. This was one of the best parts of the book. He’s so aware of what his role is compared to what he wants it to me. I loved the parts with Clarissa and Troy coming together to be good parents for Dante.
Let’s talk about the romance. I totally love it and I’m really here for it, but…Troy is a fuckboy and I didn’t like that it wasn’t really shown. It was talked about in abundance in The Guy on the Right because Theo is making breakfast for all the girls that Troy has a one night stand with, but it’s not really addressed in The Guy on the Left. I didn’t like that I was sort of left wondering how long he kept up with his one night stands and when he stopped them because he loved Clarissa. Aside from this, I liked the scenes that were in both books. I liked that Troy and Lance seem to be sort of friends and confide in one another. I enjoyed the romance and I liked that Troy was finally standing up for himself to fight to have this relationship with his son.
Overall, I liked this book. It was enjoyable. I was entertained the whole time. The sex scenes were pretty great (read: sexting scene was totally hot). There were good friends in this book, as there was with the first. I loved Clarissa’s best friend, Parker (also I want her to get her own romance.) Troy’s friends were not as involved, but still present and I liked them too. I didn’t like this book as much as I liked the first in the series, but I still enjoyed it and I will definitely be continuing onto the third book where we learn about the mysterious Lance.

2 thoughts on “The Guy on the Left by Kate Stewart”