GoodReads Summary:
Last spring, Nikki Beckett vanished, sucked into an underworld known as the Everneath, where immortals Feed on the emotions of despairing humans. Now she’s returned—to her old life, her family, her friends—before being banished back to the underworld… this time forever.
She has six months before the Everneath comes to claim her, six months for good-byes she can’t find the words for, six months to find redemption, if it exists.
Nikki longs to spend these months reconnecting with her boyfriend, Jack, the one person she loves more than anything. But there’s a problem: Cole, the smoldering immortal who first enticed her to the Everneath, has followed Nikki to the mortal world. And he’ll do whatever it takes to bring her back- this time as his queen.
As Nikki’s time grows short and her relationships begin slipping from her grasp, she’s forced to make the hardest decision of her life: find a way to cheat fate and remain on the Surface with Jack or return to the Everneath and become Cole’s… 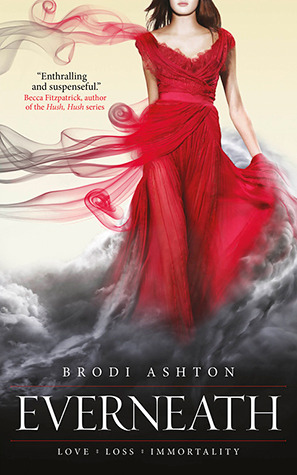 Review:
I have to start this review by saying that I have read this book before. I know that I have read it, but I didn’t remember any of the story while I was rereading (which is the whole reason I reread it). Everneath was a very run of the mill 2012 paranormal YA fantasy story. I think the concept was better than its execution, but for a debut novel, it could have been much worse. I don’t want to talk too negatively about this book because I had fun while I was reading it but there were definitely some issues.
The pacing was pretty good. Each chapter started with a certain about of time left until her ‘return.’ But there were also flashback chapters that counted down until when she first vanished. I thought this was a fun way to tell the story.
There were a few things that I thought could have been further explained when it came to the world-building. I understand that we only got to know as much as Nikki knew, but I still think there were certainly more opportunities to fill out the world. I was left with too many questions.
The love triangle was…weird. It wasn’t really a love triangle because it was clear who Nikki really cared about. It was a little annoying too with Cole constantly trying to tell Nikki that he loved her, but never really showed it. I liked all the characters well enough, but I think the best friend Jules could have been further developed. I’m hoping we will get that in the next books.
Finally, I wish the author had shown more than told. There were a few times within chapters where there were mini headings that stated the location. Times that could have been shown to us rather than told in this way. There were a handful of other parts of the story that were told when they could have been shown.
Overall, this was a book that I enjoyed despite the things I didn’t love. It was a pretty average read for me. I will continue the series because I own all three books and I’m still a bit curious as to how things will turn out for our stubborn little Nikki.