Summary:
New York City as you’ve never seen it before. A thousand-story tower stretching into the sky. A glittering vision of the future, where anything is possible—if you want it enough.
Welcome to Manhattan, 2118.
A hundred years in the future, New York is a city of innovation and dreams. But people never change: everyone here wants something…and everyone has something to lose.
Leda Cole’s flawless exterior belies a secret addiction—to a drug she never should have tried and a boy she never should have touched.
Eris Dodd-Radson’s beautiful, carefree life falls to pieces when a heartbreaking betrayal tears her family apart.
Rylin Myers’s job on one of the highest floors sweeps her into a world—and a romance—she never imagined…but will her new life cost Rylin her old one?
Watt Bakradi is a tech genius with a secret: he knows everything about everyone. But when he’s hired to spy by an upper-floor girl, he finds himself caught up in a complicated web of lies.
And living above everyone else on the thousandth floor is Avery Fuller, the girl genetically designed to be perfect. The girl who seems to have it all—yet is tormented by the one thing she can never have.
Debut author Katharine McGee has created a breathtakingly original series filled with high-tech luxury and futuristic glamour, where the impossible feels just within reach. But in this world, the higher you go, the farther there is to fall…. 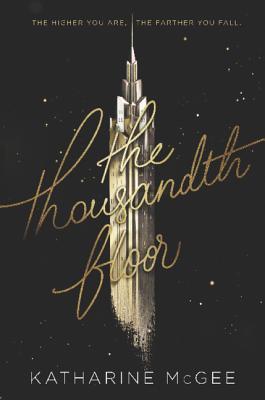 Review:
I was really excited by the premise of this story. Gossip Girl but in the future? Sign me up. Sadly, all we got was the bitchiness of rich girls, a little bit of racism, and not nearly enough of the few things I did like.
The world-building was not great. I wanted more of it. We got to see a little bit of the layout of the Tower, but I wanted more. I wanted to know why they created the Tower, why and how technology developed. Just more.
The characters were also not great. Only one had some great promise and she was killed off. I don’t want to go into too much detail because I just don’t care enough to go into all the things I liked or didn’t. The majority of them were shallow and cared entirely too much the number of the floor they lived on. They all cared too much what everyone else thought. They all flaunt their drinking, partying, and drug use too much. None of their friendships were even halfway real. There was also a pretty uncomfortable relationship between a girl and her adopted brother. I get that they’re not related by blood, but a sibling is a sibling.
There was a fairly diverse cast of characters, but the wealthy ones were white and the poor ones were not. And the one not white wealthy character was addicted to drugs.
This was just all around not well executed. I wanted so many things from this story but I didn’t really get any of them. I have heard the next one is better, but I’m not sure I care enough to continue the story.

4 thoughts on “The Thousandth​ Floor by Katharine McGee”