Hi, bookworms!I thought an update would be great now that we’ve made it through week one of the Tome Topple Readathon Challenge! Just here for a check in to let you guys know where we’re at with our goals and TBR lists and ask how everyone else is doing so far in this readathon challenge. Without further ado! 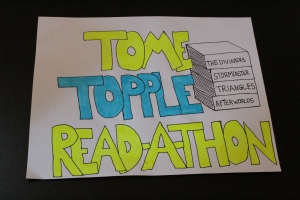 Amanda- So far I’ve completed one full book for this challenge. It’s one that I’ve been putting off because it’s part of a series but the last book hasn’t been released yet and I don’t want to wait a whole year to know what happens next! Stormcaster by Cinda Williams Chima is the third book in the Shattered Realms series. Here are links for my reviews of the first book, Flamecaster, the second book, Shadowcaster, and the review I just posted today for the third book, Stormcaster. Next, I’ve started Triangles by Ellen Hopkins and I will hopefully be done with it by the end of this weekend. But I might not be because I’m visiting some family this week and I’m not sure if I will have as much time as I want to read. This book fulfills the ‘adult novel’ challenge for this readathon. I’ll be sure to post the review once I’ve finished it.I’ve also been listening to some audiobooks (I’m not sure what the ruling is on audiobooks for Tome Topple) that are over 500 pages in their paper copies. So I’m going to count it. American Gods by Neil Gaiman so far is bizarre and weird but I just can’t stop listening. So far, I’m doing better than I thought I was going to with everything else I have going on this week. I’m hoping to keep that progress where it’s at and keep moving forward page by page!

Antonia- I just finished Inkheart by Cornelia Funke which fulfills the ‘part of a series’ category. You can read my review of it here. I’ve already started the second book in the series, Inkspell, though I, unfortunately, don’t have the third book yet. I’m working the next eight days straight so my reading will probably be pretty slow for a bit. I’m hoping to at least finish Inkspell though.

This is where we are both at so far for the Tome Topple Challenge. Who else is participating in this readathon? Where are you at with the TBR list you had planned?