GoodReads Summary:
The first book in a new trilogy from acclaimed New York Times–bestselling author Rae Carson. A young woman with the magical ability to sense the presence of gold must flee her home, taking her on a sweeping and dangerous journey across Gold Rush–era America. Walk on Earth a Stranger begins an epic saga from one of the finest writers of young adult literature.
Lee Westfall has a secret. She can sense the presence of gold in the world around her. Veins deep beneath the earth, pebbles in the river, nuggets dug up from the forest floor. The buzz of gold means warmth and life and home—until everything is ripped away by a man who wants to control her. Left with nothing, Lee disguises herself as a boy and takes to the trail across the country. Gold was discovered in California, and where else could such a magical girl find herself, find safety?
Rae Carson, author of the acclaimed Girl of Fire and Thorns series, dazzles with the first book in the Gold Seer Trilogy, introducing a strong heroine, a perilous road, a fantastical twist, and a slow-burning romance, as only she can. 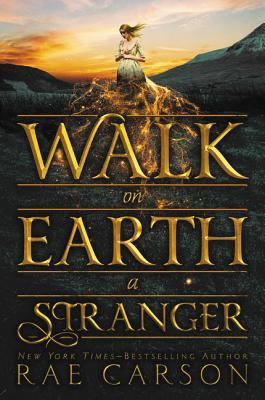 Review:
I have to start by saying that I thought this was a totally different book. I was rereading this because I thought it was a book about something else. Despite going into this expecting a different story, I still liked it. I’m not big on historical fiction but this one was good.
Lee is going west to meet her best friend after her parents were murdered. Her journey was full of action and adventure, loss and love. I thought her ability to sense gold was really interesting.
This cast of characters had so many secrets that were revealed in time. I thought the writing was really well done. I also thought despite the book being kind of slow, it was still interesting.
It’s not my usual genre, but I still enjoyed this book. The characters were complex and interesting. The plot was a bit slow, but there was enough action that it wasn’t boring. Lovers of historical fiction will probably love this book. It talked about some complex topics with the inclusion of slaves and Native Americans. I thought those topics were discussed very well.