GoodReads Summary:
.27 IS A NUMBER RUBY HATES.
It’s a number that marks the percentage of the population that survived. It’s a number that means she’s one of the “lucky” few still standing. And it’s a number that says her father is probably dead.
Against all odds, Ruby has survived the catastrophic onset of the killer rain. Two weeks after the radio started broadcasting the warning “It’s in the rain. It’s fatal, it’s contagious, and there’s no cure,” the drinkable water is running out. Ruby’s left with two options: persevere on her own, or embark on a treacherous journey across the country to find her father–If he’s even still alive. 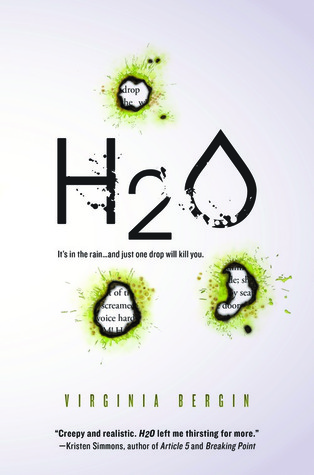 Review:
My biggest issue with this book was that the main character, Ruby, was honestly so annoying. There’s literally no way she should have survived. She only did because of her step-dad who she was a huge jerk to until the world was ending. If Ruby had been a more likable main character, I probably would have really loved this book. It had all of the things I love: the world ending via spooky alien things, acid rain (it’s not really acid but whatever), nerdy boys who take in children. There were so many good things that were overshadowed by Ruby being the one telling the story. She’s just so rude and selfish. She also continually made really poor choices. I wanted to love this book, but Ruby made that hard.
So, I didn’t love it. I read reviews for the second book that said this aspect of the story (Ruby) is much better in the second book, so, I’m going to check out the ebook from my library and give it a go.