Summary:
The widowed Diana, Lady Templeton and Jeremy, Marquess of Willingham are infamous among English high society as much for their sharp-tongued bickering as their flirtation. One evening, an argument at a ball turns into a serious wager: Jeremy will marry within the year or Diana will forfeit one hundred pounds. So shortly after, just before a fortnight-long house party at Elderwild, Jeremy’s country estate, Diana is shocked when Jeremy appears at her home with a very different kind of proposition.
After his latest mistress unfavorably criticized his skills in the bedroom, Jeremy is looking for reassurance, so he has gone to the only woman he trusts to be totally truthful. He suggests that they embark on a brief affair while at the house party—Jeremy can receive an honest critique of his bedroom skills and widowed Diana can use the gossip to signal to other gentlemen that she is interested in taking a lover.
Diana thinks taking him up on his counter-proposal can only help her win her wager. With her in the bedroom and Jeremy’s marriage-minded grandmother, the formidable Dowager Marchioness of Willingham, helping to find suitable matches among the eligible ladies at Elderwild, Diana is confident her victory is assured. But while they’re focused on winning wagers, they stand to lose their own hearts.

Review:
Thank you NetGalley and publishers for this eARC in exchange for an honest review. I really enjoyed Waters’ debut novel, To Have and to Hoax. So, I was excited when I was approved for an arc of To Love and to Loathe.
This is an enemies to lovers, friends with benefits story. Diana and Jeremy aren’t really enemies, but they definitely don’t get along. When together, which happens often as Jeremy is good friends with Diana’s brother, all they do is argue. Neither of them can let the other have the last word and they both always need to be right. The banter and arguing (read: flirting!) was the best part of this book. Diana is witty and quick with her rebuttals. I really enjoyed their debates. They were always filled with sexual tension that’s obvious to the reader, but not the characters. I think both Jeremy and Diana were well fleshed out characters. Both had backstories that fit well with why they are the way they are. Their growth felt organic and not at all forced. I just genuinely liked their relationship.
I also want to mention that I really loved Diana’s friends. We know them from Waters’ previous novel. But I liked getting to see Violet and Audley, getting caught flushed and sweaty. I also liked seeing more of Emily and learning a bit more about her romantic prospects.
Overall, I enjoyed this one. I liked all the characters. The setting felt like a traditional historical romance, not that there’s anything wrong with that. But it felt familiar. It felt like something I’d read before because there’s only so much that can be unique when it comes to these kinds of romances. I don’t think that lessened my enjoyment of the story because the characters were so entertaining and likeable. I will absolutely recommend this one for historical romance fans.

GoodReads Summary:
Five years ago, Lady Violet Grey and Lord James Audley met, fell in love, and got married. Four years ago, they had a fight to end all fights, and have barely spoken since.
Their once-passionate love match has been reduced to one of cold, detached politeness. But when Violet receives a letter that James has been thrown from his horse and rendered unconscious at their country estate, she races to be by his side—only to discover him alive and well at a tavern, and completely unaware of her concern. She’s outraged. He’s confused. And the distance between them has never been more apparent.
Wanting to teach her estranged husband a lesson, Violet decides to feign an illness of her own. James quickly sees through it, but he decides to play along in an ever-escalating game of manipulation, featuring actors masquerading as doctors, threats of Swiss sanitariums, faux mistresses—and a lot of flirtation between a husband and wife who might not hate each other as much as they thought. Will the two be able to overcome four years of hurt or will they continue to deny the spark between them? 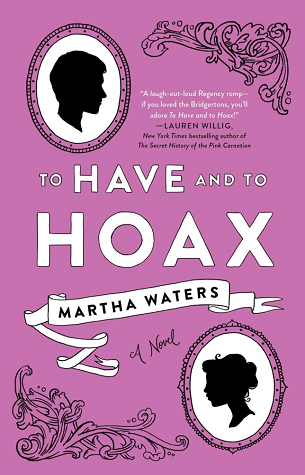 Review:
This book was fun. We follow James and Violet after they’ve been married five years. But something happened four years ago, something that was supposed to be mysterious and it was because we didn’t find out what the fight was about until about halfway. But it was a bit repetitive. The way both James and Violet talked about their fight, they both said the same things over and over. That was a little annoying, but it’s a small thing.
I was anticipating more hilarity from the premise saying that they were going to go back and forth essentially lying to one another, but it wasn’t as fast-paced as I thought it would be. Though it was slow, I still enjoyed it. The end third of the book was the best. When the couple finally acknowledge that they know what the other has been up to is when things got interesting for me.
Overall, this book was enjoyable. I thought it was fun and silly. I liked James and Violet and I liked them even better once they fixed their issues and got back together.