GoodReads Summary:
In his penultimate adventure, a devastated but determined Apollo travels to Camp Jupiter, where he must learn what it is to be a hero, or die trying.
It’s not easy being Apollo, especially when you’ve been turned into a human and banished from Olympus. On his path to restoring five ancient oracles and reclaiming his godly powers, Apollo (aka Lester Papadopoulos) has faced both triumphs and tragedies. Now his journey takes him to Camp Jupiter in the San Francisco Bay Area, where the Roman demigods are preparing for a desperate last stand against the evil Triumvirate of Roman emperors. Hazel, Reyna, Frank, Tyson, Ella, and many other old friends will need Apollo’s aid to survive the onslaught. Unfortunately, the answer to their salvation lies in the forgotten tomb of a Roman ruler . . . someone even worse than the emperors Apollo has already faced.

Review:
The Tyrant’s Tomb is the second to last book in the Trials of Apollo series. I actually had to take a break after the last book (The Burning Maze). I think that’s because I listened to the audiobooks for the first three books all in a row and I just needed a break from audiobooks. So, I took my break and then picked this one up.
I’m not going to lie. I cried several times while listening to this story. This is absolutely my favorite book in the series (unless the last one is even better). Apollo’s growth really shows in these pages. He’s doing things like helping his friends and putting himself in danger because he cares about those around him, rather than avoiding danger because of selfish reasons. I really liked his growth. Part of the reason I didn’t love the first three books was that Apollo was a jerk. He still has some negative qualities, but he’s really grown with his experiences of having to think like mortals do. He’s still incredibly vain and talks way too much about his weak, flabby body.
I really loved getting to see characters from the previous series, like Hazel and Frank. I loved being back at the Roman camp, a familiar place. It was so enjoyable to see new characters in a place I already love.
Overall, this book has it all. It has great character growth, action, and adventure, quests, and the audiobook narrator did an incredible job telling this story.

GoodReads Summary:
The formerly glorious god Apollo, cast down to earth in punishment by Zeus, is now an awkward mortal teenager named Lester Papadopoulos. In order to regain his place on Mount Olympus, Lester must restore five Oracles that have gone dark. But he has to achieve this impossible task without having any godly powers and while being duty-bound to a confounding young daughter of Demeter named Meg. Thanks a lot, Dad.
With the help of some demigod friends, Lester managed to survive his first two trials, one at Camp Half-Blood, and one in Indianapolis, where Meg received the Dark Prophecy. The words she uttered while seated on the Throne of Memory revealed that an evil triumvirate of Roman emperors plans to attack Camp Jupiter. While Leo flies ahead on Festus to warn the Roman camp, Lester and Meg must go through the Labyrinth to find the third emperor—and an Oracle who speaks in word puzzles—somewhere in the American Southwest. There is one glimmer of hope in the gloom-filled prophecy: The cloven guide alone the way does know. They will have a satyr companion, and Meg knows just who to call upon. . . . 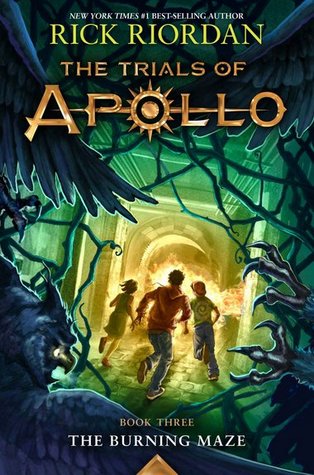 Review:
I think I’m going to keep this review short because I tend to say the same things when I review Riordan’s books. So, in The Burning Maze the characters find themselves in a literal burning maze. They face all sorts of trials and challenges as they are looking for the next oracle on the list and facing the third Roman emperor.
The things I liked about this book were all about the characters. I really loved seeing Grover again. I enjoyed learning about where he’s been since the end of Percy’s books. I always love seeing old characters in new stories. Grover is sort of the voice of reason in this story and it was great. Apollo was better in this book. He was less insufferable. He had actually sort of started to think about how he might change his behavior if/when he was to regain his godliness. I really enjoyed this aspect of his development because he’s been pretty terrible in his complaining about not being a god. I also loved how much he was really starting to care about those around him (read: Meg). He’s growing and I hope it continues. Meg is still a big mystery. We learn a bit about her childhood before her dad died and I loved that. I loved learning more about her, but I was still left wanting more. We still haven’t really found out what happened before she left Nero again and I want to know.
Overall, I enjoyed this story and I’m excited to continue. I always love seeing more mythological creatures brought to life by Riordan. I love that these characters are growing and that we’re getting to see old friends. But I also love all of the new friends we’ve made as well. Also, my heart is broken and I’ll never forgive you Rick Riordan (you know what you did.) 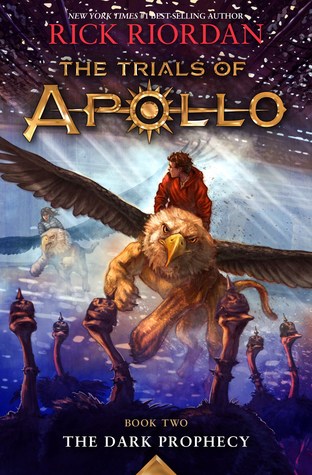 GoodReads Summary:
How do you punish an immortal?
By making him human.
After angering his father Zeus, the god Apollo is cast down from Olympus. Weak and disorientated, he lands in New York City as a regular teenage boy. Now, without his godly powers, the four-thousand-year-old deity must learn to survive in the modern world until he can somehow find a way to regain Zeus’s favour.
But Apollo has many enemies—gods, monsters and mortals who would love to see the former Olympian permanently destroyed. Apollo needs help, and he can think of only one place to go… an enclave of modern demigods known as Camp Half-Blood.

Review:
Okay, I’m going to be honest here. I was pretty excited about the concept of Apollo being stuck in a mortal body but it actually was my least favorite thing about this book.
I loved getting to see all my old favorites like Percy and his mom. I also loved that this story actually mostly takes place at camp half-blood. It was so fun for me to get to explore more of the camp. I loved everything that happened in the woods.
But Apollo was pretty insufferable. He’s a God trapped in the body of a teenager named Lester. First of all, is this some sort of possession kind of thing? Because if so, poor Lester. If not, I’d like some more explanation. Apollo is coming to terms with the fact that he’s a sixteen-year-old mortal boy. One with acne, which is commented on at least ten times. I get that he’s supposed to be growing, but every time he made progress, he then took five steps back. That was frustrating because it felt like he’d have these huge revelations then just go back to complaining about how he wasn’t an all-powerful god anymore. He was so selfish and conceited it was hard to like him when he kept regressing. Though I’m hoping he will make more actual progress in the next books.
Overall, this was still a fun story. I loved how the plot is connected to things that happened in the previous series. I also love that we got to see characters from those series that I wasn’t ready to say goodbye to yet. But I also liked that there’s a whole new cast of characters for the reader to learn about and love (read: the characters in the Apollo cabin). I also enjoyed the twists. I definitely saw a few of them coming but they were still good and pulled at my emotions. Finally, I loved that Apollo was so casual about his bisexuality. He talks about flirting and loving both men and women and it was basically the only thing I liked about him. I’m definitely going to continue the series; I’m just really hoping Apollo gets less annoying.