GoodReads Summary:
Ever since the gods of Ancient Egypt were unleashed in the modern world, Carter Kane and his sister Sadie have been in trouble. As descendants of the House of Life, the Kanes have some powers at their command, but the devious gods haven’t given them much time to master their skills at Brooklyn House, which has become a training ground for young magicians.
And now their most threatening enemy yet – the chaos snake Apophis – is rising. If they don’t prevent him from breaking free in a few days’ time, the world will come to an end. In other words, it’s a typical week for the Kane family.
To have any chance of battling the Forces of Chaos, the Kanes must revive the sun god Ra. But that would be a feat more powerful than any magician has ever accomplished.
First they have to search the world for the three sections of the Book of Ra, then they have to learn how to chant its spells. Oh, and did we mention that no one knows where Ra is exactly?
Narrated in two different wisecracking voices, featuring a large cast of new and unforgettable characters, and with adventures spanning the globe, this second installment in the Kane Chronicles is nothing short of a thrill ride. 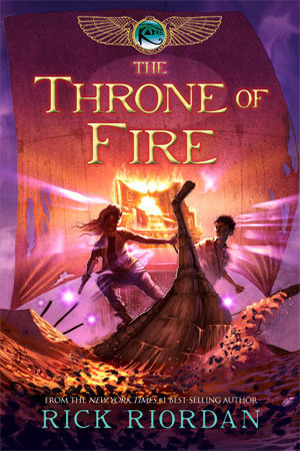 Review:
I loved this book just as much as the first. At this point, I really don’t think there is anything that Rick Riordan writes and publishes that I won’t love. In The Throne of Fire, we’re thrown right back into the chaos that is the Kane sibling’s lives. They defeated Set in the previous book, but the chaos allowed a bigger problem to arise. This is that story.
Like the first book, this story is told via Carter and Sadie. The siblings are recording the events after the fact in an audio recording so that it can be sent to those that might need to hear it. I thought this was a really interesting way to tell the story. Both siblings get to tell parts of the story and they just make it so fun to read. I bet the audiobook is incredible.
Carter and Sadie have both grown in this book. They’ve given up their godly powers and have mostly learned how to use their own abilities. They have also started teaching others. This was the only thing I didn’t love about this book. We weren’t really introduced to all the new students at the Brooklyn House. They were just suddenly there. We did get a bit more information about them as the story goes along, but two of them were right at the beginning of the story and I had no idea who they were. But as I got to know them, I got over that. Carter and Sadie both have to make some hard choices in this book, but I really liked how they each handled the situations they were put in.
Overall, I loved this book and I cannot wait to read the final book. Things were left sort of up in the air at the end. There was a conclusion, but there was a definite ‘to be continued’ implied. I loved the mythology. I loved all the characters, old and new. I just loved this book.