GoodReads Summary:
Lada Dracul has no allies. No throne. All she has is what she’s always had: herself. After failing to secure the Wallachian throne, Lada is out to punish anyone who dares to cross her blood-strewn path. Filled with a white-hot rage, she storms the countryside with her men, accompanied by her childhood friend Bogdan, terrorizing the land. But brute force isn’t getting Lada what she wants. And thinking of Mehmed brings little comfort to her thorny heart. There’s no time to wonder whether he still thinks about her, even loves her. She left him before he could leave her.
What Lada needs is her younger brother Radu’s subtlety and skill. But Mehmed has sent him to Constantinople—and it’s no diplomatic mission. Mehmed wants control of the city, and Radu has earned an unwanted place as a double-crossing spy behind enemy lines Radu longs for his sister’s fierce confidence—but for the first time in his life, he rejects her unexpected plea for help. Torn between loyalties to faith, to the Ottomans, and to Mehmed, he knows he owes Lada nothing. If she dies, he could never forgive himself—but if he fails in Constantinople, will Mehmed ever forgive him?
As nations fall around them, the Dracul siblings must decide: what will they sacrifice to fulfill their destinies? Empires will topple, thrones will be won . . . and souls will be lost. 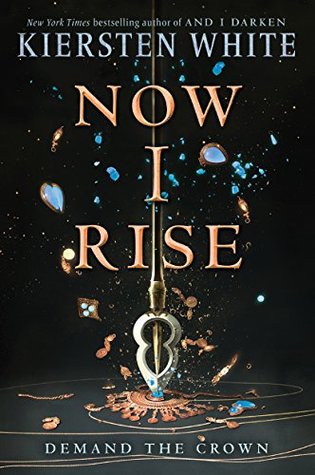 Review:
Where to start? If I thought Lada was savage and fierce in the first book, she is ten times that in this second book. She basically kills her way to the throne and I loved every single page of it. I love her friends and fellow soldiers that she takes with her on her path back to the Wallachian throne. I love that, while she is their leader, she listens to them and considers them friends. She takes their advice into consideration. She really cares about them and them about her. They make her more likable because it’s clear that she loves them all.
Radu is off in a completely different part of the world than his sister and with his own mission. Radu’s part of the story honestly just made me sad. Both siblings struggle with their feelings for their childhood friend, Mehmed. But with Radu, it’s worse because he’s doing things he never would have if not for Mehmed, while Lada has proven, again and again, she’ll do anything to get her throne. Radu does things he is very ashamed of but continues doing them all because of his love for Mehmed. It made me sad because of the life that he could have had. But he made his choices. It’s made very clear that everything he does is a choice that he’s thought about.
I thought it was very interesting to see how the siblings both handled the struggle that was their love for Mehmed. Honestly, I was hoping Mehmed would die most of the book so they could both be free. I also liked that we got both Radu’s and Lada’s stories even though they were both in different countries. Though it did make me sad they weren’t together. I’m hoping they get to reunite in the final book.
Overall, just like book one, I was blown away by Kiersten White’s writing. The history was fascinating, but the way that White brought these characters to life, made me care about them even though they’re both pretty terrible was amazing. I’m typing this on my phone so that I can continue on to the final book right now and not worry about mixing details up for whichever book. Please go read this series if you like historical fiction, savage female leads, and soft boys doing terrible things for love.

“Hold hands with the devil until you are both over the bridge. Or kill the devil and burn the bridge so no one can get to you.”

“I cannot imagine a god who hates anything that is love, any way we find to take tender care of each other. I want you to find that same love, and I never want you to hate yourself for any love that is in you.”

“I think if you had been born a boy, perhaps you would have been satisfied with what the world offered you. That is how we are alike. We saw everything that was not ours, and we hungered. Do not lose that hunger. You will always have to fight for everything. Even when you already have it, you will have to keep fighting to maintain it. You will have to be more ruthless, more brutal, more everything. Any weakness will undo everything you have accomplished. They will see any crack as evidence that they were right that a woman cannot do what you do.”

“He was no longer a lost little boy in a strange new city. Now he was a lost man in a broken old city, and no amount of prayers and kindness could undo what had been done.”