Top Ten Tuesday is a weekly post giving our top ten on different topic. This is hosted by THE BROKE AND THE BOOKISH. This weeks topic is Top Ten New-To-Me Favorite Authors I Read For The First Time In 2015. This was one I had to take my book list out for because I have a habit of sticking to authors I’ve read before. Here goes!

So after lots of thought and comparing the books I’ve read this year, these are the ten I’ve come up with. There’s still a month left of 2015, maybe you can add one or two to your book list!

Top Ten Tuesday is a weekly meme hosted by The Broke and The Bookish. This weeks theme is top ten books that I was forced to read. This was kind of difficult for me, because I’m willing to read pretty much anything. So here’s what I came up with.

1)The Twilight Series by Stephanie Meyer– My middle school librarian was someone that I was really close with. I was an awkward kid that liked books. She told me to read this series, way before it was huge. It took me quite a while to actually read them, but I ended up really really liking the series.

2)The Things They Carried by Tim O’Brien– This was a school assigned book. It was required. I ended up thinking that it was really interesting, even though it wasn’t really my kind of book. I dated this guy, that was in the marines. He didn’t like to read, but I showed him this book and he really liked it too. So it was useful that I’d read it.

5)Hard Eight by Janet Evanovich– This one was an influence from my mom’s side of the family. They’re all avid readers and this series is a family favorite. They made me read this one first, which obviously led to me reading the entire series.

6)The Perks of Being a Wallflower by Stephen Chbosky– A girl I used to know is obsessed with this book. She loves this as much as I love Looking for Alaska. So she forced me to read it. I definitely wouldn’t call it a favorite, but I enjoyed it.

7)Graceling by Kristin Cashore– Antonia was the one to force this book upon me. It seemed a little too much on the fantasy side for me when I read the description. I ended up adoring this book. Also falling in love with Fire and Bitterblue.

8)What Happens in London by Julia Quinn– This was another that Antonia forced on me. This book was the first of Quinn’s I’d ever read. And now I’d like to think I’ve read almost all of what she’s written or atleast a decent chunk.

9)House Rules by Jodi Piccoult– Funny story, my high school nurse was where I’d go when I didn’t want to be in class. So we’d always talk about books. On on of my last days of high school I was talking to her and she gave me this book. It was more a gift than a book being forced upon me. But it was a really good book and a really sweet gift.

10)Incarceron by Catherine Fisher– This one, I forced myself to read. The description didn’t really make me enthusiastic about it. But I kept going back to it. So I made the choice to make myself read it. I’m glad I did because it was pretty good.

These are the top ten books that I was forced to read. You can find reviews of some on the review list. What were your top ten?

Top Ten Tuesday is hosted by The Broke and The Bookish. This weeks Top Ten is favorite books before I became a blogger. These are my Top Ten favorites. There in no particular order. Let me know what you think.

2. The Ugly Duckling by Iris Johansen – I can’t even explain in words how much I love this book. The Ugly Duckling is the book that pulled me into the reading obsessed world. It was suspenseful and full of action which I’ve come to expect from Johansen. Reading this gave me a thrill that never went away.

3. Poison Study by Maria V. Snyder – I’m putting this on my list of favorites because when I finally decided to read this series I immediately fell in love. I don’t usually read fantasy type books but this book sucked me in so quickly. I didn’t out it down until I was finished.

4. Identical by Ellen Hopkins – The first time I read this book I was a mess by the time I finished. This book shocked me, made me think. I couldn’t put it down. I love everything about this book. You should too.

5. The Next Always by Nora Roberts – The Inn Boonsboro books are a fantastic read. The first is my favorite because, basically, Claire. I fell in love with Claire and her three boys and her bookstore very quickly. Read this book now.

6. A Million Little Pieces by James Frey – I’ve read this book a few times and it’s on my favorites list because the truth of this story blew me away. The powerfulness of this man’s struggles really got to me.

7. Hard Eight by Janet Evanovich – I love the Stephanie Plum series because they’re enjoyable and seriously funny books. Eight’s my favorite because lots of things happen with my favorite characters. Along with the new characters that are introduced and the crazy things Stephanie gets herself into.

8. Breathing Underwater by Alex Flinn – This book was shown to me by my brother which, if you knew him, you’d know that he doesn’t belong in the same sentence as the word book. I didn’t know what to expect from a book my brother recommended but I gave it a shot. I’ve read many of Alex Flinn’s books and this is by far my favorite out of all of them.

10. Nobody’s Baby But Mine by Susan Elizabeth Phillips – I have read so many books by her and I love them all but this is my favorite. It’s hilarious, heart breaking and suspenseful all at the same time. 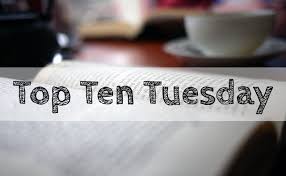 Top Ten Tuesday is hosted by http://brokeandbookish.blogspot.com/ in which we answer a weekly topic with our top ten. This weeks topic is Top Ten books at the TOP of my spring 2013 to be read list. Here’s mine in no special order.

1. Looking for Alaska by John Green – I’ve read this book countless times. It’s my all time favorite book and I like to reread it frequently. And I’d like to do that again soon because this book is fantastic. If you haven’t read it, you need to as soon as humanly possible.

2. Clockwork Princess by Cassandra Clare- This book hasn’t come out yet. But I’ve read the first two in the series and I just all around love Cassandra Clare’s books.

3. Light by Michael Grant – Another book that isn’t out yet. With five already out in the series, I’ve been dying for the final book in the Gone series. Amazing books and I’m excited to see how everything turns out finally.

4. The Eternity Cure by Julie Kagawa – I absolutely loved reading The Immortal Rules, the book written before this. It sucked me in, and I’m hoping the squeal has a similar affect like all her books.

5. Chosen at Nightfall by C.C. Hunter – I read the first three or four in this series in less than a week. I’m pretty sure there’s going to be another book in the series coming out after this one. But I’m still super excited to know what happens next, even if I have to deal with waiting for the next again.

6. Spellcaster by Claudia Gray – I’m not overly excited about this book. It’s the first in a new series by Gray. I read her last series and enjoyed them. So, I’m giving her new one a chance too.

7. The Host by Stephenie Meyer – I’d like to read this again before I go see the movie. But every time I try I just lose interest really quickly. I’m definitely going to try again and maybe get through it.

8. The Face of Deception by Iris Johansen – I’ve kind of slowly fell away from reading Johansen’s books. So, in honor of the three new Eve Duncan books coming out this year, I’m going to start reading them again. This is the first in the Eve Duncan series.

9. Born in Fire by Nora Roberts – I have a goal to read all of Nora Robert’s trilogies. This is a book that’s been sitting on my shelves for what seems like forever. So I think I’ll finally give it some loving.

10. Jack and Jill or 1st to Die by James Patterson – I haven’t decided if I’m going to start the Women’s Murder Club series, or the Alex Cross series first. They’re both series that I own some but not all of the books. I think I’ll end up starting 1st to Die first because I own more books in this series.

Well, now that I just want to read all these books right now. These are my top ten to be read on my spring 2013 list.
What are yours?