GoodReads Summary:
Charlotte Holmes and Jamie Watson think they’re finally in the clear. They’ve left Sherringford School—and the Moriartys—behind for a pre-college summer program at Oxford University. A chance to start from scratch and explore dating for the first time, while exploring a new city with all the freedom their program provides. But when they arrive, Charlotte is immediately drawn into a new case: a series of accidents have been befalling the members of the community theater troupe in Oxford, and now, on the eve of their production of Hamlet, they’re starting all over again. What once seemed like a comedy of errors is now a race to prevent the next tragedy—before Charlotte or Jamie is the next victim. 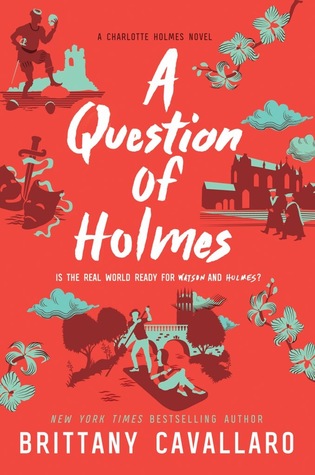 Review:
A Question of Holmes is the final book in the Charlotte Holmes series. Part of me is really sad that this series has ended, and another part of me thought it was the perfect ending. This final book is told entirely from Charlotte’s perspective, which is something I wanted in the first two books. But in this one, I mostly just wanted to hear from Jamie again.
Charlotte had grown exponentially in this series. This final book is evidence of that. We see her trying to use the things she’s learned in therapy. She’s trying to not fall back into old habits, even though it would be so easy to do so. I really liked this new version of Charlotte. She’s always been really self-aware, but now was trying to get out of her self-destructive habits.
Jamie has also changed. We only see him from Charlotte’s point of view. But it’s still clear that he sees Charlotte for who she is. He no longer adores her without abandon. He still obviously loves her, but he also isn’t afraid to leave if she starts becoming self-destructive again. He knows she has flaws and encourages her to overcome them.
The mystery in this one was exactly what I was expecting the first book to be. It was a light-hearted, curious but mostly harmless mystery. It was not the life or death matter that the other books turned out to be. I really enjoyed that. The stakes were much lower for everyone involved. I liked that because while the high stakes made the story fast-paced and exciting in the previous books, I don’t think that would have been right for this final book.
Overall, I enjoyed this one so much. I’m still undecided on whether or not I love the ending. I liked it, but did I love it? I honestly don’t know. It wasn’t the happily ever after that I wanted, but I think maybe it’s what was best for Jamie and Charlotte. Not a solid ending, but hope for a better future for both of them. If you haven’t read this series, please stop what you’re doing and go read it now.

“Whatever Watson and I were to each other was our business, no matter how the world leaned in and breathed against the glass.”

“I would be lying if I said I didn’t love these moments—him looking at me like I had in my hands a curtain pull, that I could reveal the underbelly of the world.”

“A secret is something embarrassing. Something compromising, something with power. Secrets are what we make art from.”

“My past made me who I am. There is no way to wipe that clean.”

GoodReads Review:
It’s been a year since the shocking death of August Moriarty, and Jamie and Charlotte haven’t spoken.
Jamie is going through the motions at Sherringford, trying to finish his senior year without incident, with a nice girlfriend he can’t seem to fall for.
Charlotte is on the run, from Lucien Moriarty and from her own mistakes. No one has seen her since that fateful night on the lawn in Sussex—and Charlotte wants it that way. She knows she isn’t safe to be around. She knows her Watson can’t forgive her.
Holmes and Watson may not be looking to reconcile, but when strange things start happening, it’s clear that someone wants the team back together. Someone who has been quietly observing them both. Making plans. Biding their time.
Someone who wants to see one of them suffer and the other one dead.

Review:
The Case for Jamie is the third book in the Charlotte Holmes series. It’s also the first book where we get dual perspectives through the whole book. In this latest mystery, things are…worse than they were in the other books. Things kind of went out of control in the final pages of the last book, and we are seeing the aftermath of that in this book. Charlotte and Jamie are no longer partners in anything and have gone their separate ways.
Jamie is just trying to get back to school. Trying to get his grades up and play rugby and try to get into a good college. But his dad and Leander keep dragging him back into the mysteries. Jamie was a little annoying in parts of this book. He clearly needs some sort of help, but just doesn’t get it. He doesn’t communicate, with anyone. And his relationships suffer because of this.
The same sort of goes for Charlotte. I wanted more from her perspective in the previous two books, but once I got it, it kind of makes me dislike her. She, like Jamie, clearly has issues. But we also learn her backstory, which ended up making me not dislike her. I really liked getting to see her back story.
Leander was my favorite of all the characters. He’s funny and wise, and mostly always does the right thing. I wish Jamie and Charlotte had gone to him for help sooner.
The ending of this book, like the last one, was pretty wild. I seem to have the same issue as the last one though. We don’t get anything from Jamie’s point of view after all the drama goes down and I don’t like that. So much of what happens involves him and people he cares about, but we don’t get to see any of what he’s thinking about it all in the aftermath, which bugs me.
Overall, this was another mystery that I really enjoyed. I like that Charlotte and Jamie are so flawed. They’re realistic characters with hard, real-life issues. I liked all of their friends and family. This series is complex and dark. One that I definitely recommend.

GoodReads Summary:
Watson and Holmes: A match made in disaster.
Jamie Watson and Charlotte Holmes are looking for a winter-break reprieve after a fall semester that almost got them killed. But Charlotte isn’t the only Holmes with secrets, and the mood at her family’s Sussex estate is palpably tense. On top of everything else, Holmes and Watson could be becoming more than friends—but still, the darkness in Charlotte’s past is a wall between them.
A distraction arises soon enough because Charlotte’s beloved uncle Leander goes missing from the estate—after being oddly private about his latest assignment in a German art forgery ring. The game is afoot once again, and Charlotte is single-minded in her pursuit.
Their first stop? Berlin. Their first contact? August Moriarty (formerly Charlotte’s obsession, currently believed by most to be dead), whose powerful family has been ripping off famous paintings for the last hundred years. But as they follow the gritty underground scene in Berlin to glittering art houses in Prague, Holmes and Watson begin to realize that this is a much more complicated case than a disappearance. Much more dangerous, too.
What they learn might change everything they know about their families, themselves, and each other.

Review:
I am officially obsessed with this series. I don’t know why I waited so long to pick it up. I think part of me was worried it wasn’t going to live up to the hype, but it absolutely does. The Last August was just as good as the first book in the series.
I love Charlotte Holmes. She’s flawed and so utterly human. But she’s also highly trained and is always thinking about a hundred steps ahead. I love the way her mind works and I wish we got more chapters from her point of view. She is really just a fascinating character.
Then there’s Jamie, sweet, dear Jamie. I just adore him. He’s always got something to prove. That he doesn’t need Charlotte’s training or affection. That he’s better than August. I enjoyed seeing his relationship with his dad get better over the course of the book. He finds himself in need of advice regarding the quirks of the Holmes family member, which I thought was an interesting way for them to bond.
The mystery in this book. Phew, it was a doozy. The ending was confusing and I’m honestly still not totally sure what happened. Every time I thought one thing was going on, Charlotte proved me wrong, over and over.
Overall, this was a fast-paced thrill ride with characters who have depth and real problems. I love this series and I cannot wait to continue on to the third book. If you haven’t picked up this series, what are you waiting for?