GoodReads Summary:
Return to the City of Sin, where the final game is about to begin…and winning will demand the ultimate sacrifice.
Only days after a corrupt election and brutal street war, one last bloodthirsty game has begun. The players? The twenty-two most powerful, notorious people in New Reynes.
After realizing they have no choice but to play, Enne Scordata and Levi Glaisyer are desperate to forge new alliances and bargain for their safety. But while Levi offers false smiles and an even falser peace to the city’s politicians, Enne must face a world where her true Mizer identity has been revealed…and any misstep could turn deadly.
Meanwhile, a far more dangerous opponent has appeared on the board, one plucked right from the most gruesome legends of New Reynes. As the game takes its final, vicious turn, Levi and Enne must decide once and for all whether to be partners or enemies.
Because in a game for survival, there are only losers…
And monsters. 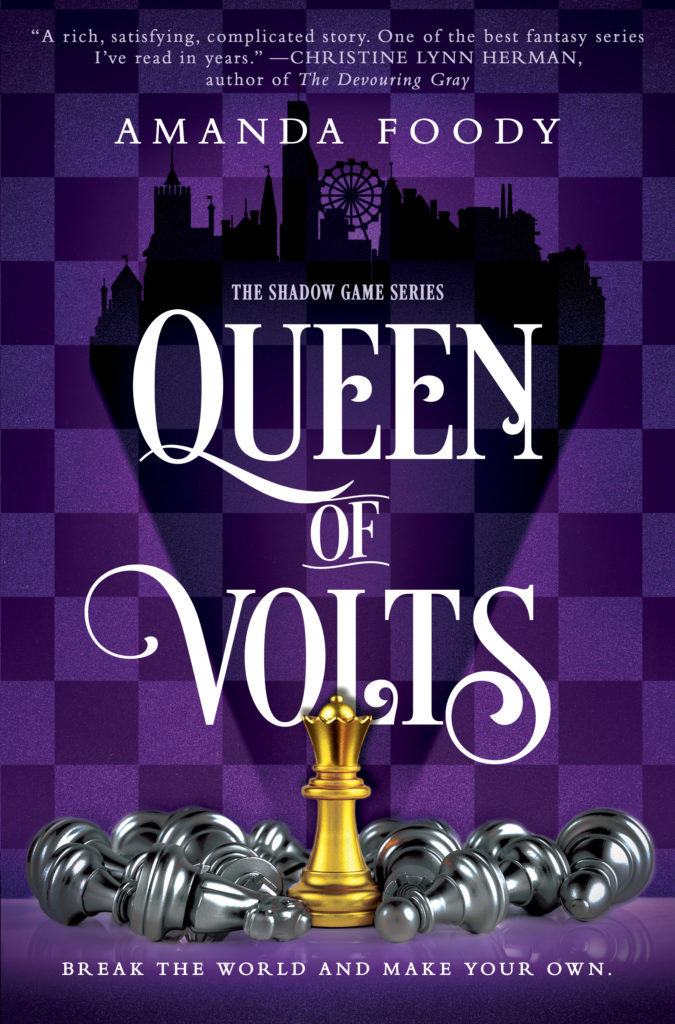 Review:
Thank you to HarperCollins for letting me be a part of this blog tour. The finale to the Shadow Game series was one of my most anticipated releases, so I was beyond excited to be able to read an eARC (thanks NetGalley!).
Queen of Volts is the conclusion of this series, so I don’t think I’ll be going into too much detail about the plot because I want you to read this series and not be spoiled. I love the world this story takes place in. New Reynes is chaotic and the characters I love so much are doing their best to make it a better place, a place no longer filled with violence and people being thought of in a specific way because of their abilities. I would love to live in the City of Sin. It’s such a fascinating place, filled with so much history and so much potential. I would read so many more books set in this world just because I love the politics. I think that’s what I liked the most about this book. It was more political than the others. Well, we get more of the actual government rather than the mobsters we get to know in books one and two. We still deal with some of the same families, but they’re working with the government now. There are so many different players in the story. I was impressed that Foody managed to give them all distinct and unique voices.
Enne is really struggling with her identity. She learns that most of her life was a lie and she created a new persona that is more fitting for the City of Sin. But it’s led her to make some choices and do some things that haunt her. Haunted, that’s a great word for Enne. She’s trying to work through her guilt while losing too many of the people that she cares about. By the end of the story though, she’s grown so much and I was so proud to see it.
Levi, my poor, sweet, Levi. He’s lost so much. And he loses more in Queen of Volts. But he accomplishes dreams he never thought he would, but also realizes his dreams were not what they used to be. Levi also really struggles with his feelings for Enne. She’s not the same girl he fell in love with and she’s done things he doesn’t know if he can accept. I loved how adaptable Levi was. He takes life in stride and always has another plan, even when it looks like there’s no way out. I just love him.
There are honestly too many characters to talk about. Lola’s perspective made me sad. She learned important information but lost so much. I loved how her story was resolved though. Grace, my poor little Grace. She did not deserve how Foody did her dirty. I love Grace with my whole heart.
Overall, I’m sad to see this series end. I loved being in this world. It’s a dark and gritty place. It’s a place where you kill or be killed and I loved every minute I spent in it. I loved these characters so much. They changed and grew so much in these pages. They loved one another and they lost friends along the way. I cannot recommend this series enough. Also, all three of these covers are freaking stunning.

“Lola wouldn’t throw her life away to become a legend—she’d die to make sure the legends were finished.”

“Everything in his life was a performance, but if he had, in fact, come here to die today, then he would die a gangster or a king?”

“That was the problem with loving someone. Once you let someone into your heart, they could take a sledgehammer to it.”

“The City of Sin was a game, and you couldn’t win if you played nice.”

“But Sophia had come to realize that she was the type of girl who some respected but few liked—like a shot of something bitter and strong. And she’d always clung to those who’d been willing to tolerate the burn.”

“It was the sort of power that made her broken throne feel sturdy enough to support her. Whatever her mistakes, whatever her story, she would not fall.”

“It felt as though the City of Sin was out there, and them in here. Or maybe it was the other way around. New Reynes wasn’t lights and cards and debauchery—it was the blurry line between friends and enemies, the smile of someone you used to know, the ghost of a victim gone, the dagger edge of a legend.”

GoodReads Summary:
On the quest to find her missing mother, prim and proper Enne Salta became reluctant allies with Levi Glaisyer, the city’s most famous con man. Saving his life in the Shadow Game forced Enne to assume the identity of Seance, a mysterious underworld figure. Now, with the Chancellor of the Republic dead and bounties on both their heads, she and Levi must play a dangerous game of crime and politics…with the very fate of New Reynes at stake.
Thirsting for his freedom and the chance to build an empire, Levi enters an unlikely partnership with Vianca Augustine’s estranged son. Meanwhile, Enne remains trapped by the mafia donna’s binding oath, playing the roles of both darling lady and cunning street lord, unsure which side of herself reflects the truth.
As Enne and Levi walk a path of unimaginable wealth and opportunity, new relationships and deadly secrets could quickly lead them into ruin. And when unforeseen players enter the game, they must each make an impossible choice: To sacrifice everything they’ve earned in order to survive…
Or die as legends.

Review:
I have to start off by thanking NetGalley and Harlequin Teen for this ARC in exchange for an honest review. I had been interested in reading Ace of Shades for some time and getting this ARC was the perfect opportunity. Read my review HERE. I’m also meeting Amanda Foody as one of her signing events when she tours for King of Fools. So, I’m very happy to have been able to read this book early.

“Ambition was the deadliest sin of all.”

I had so much fun reading King of Fools. I found that I enjoyed it more than the first book in the series. Already knowing the characters and a bit about the world helped. Though we did get to learn more about both, I think already knowing a bit helped me get into the story quicker and really enjoy the chaos and antics that ensued.

“He would rather die a legend than end his life in anonymity.”

I think my favorite thing about this book was getting more into the world. This place that Amanda Foody has created is compelling and dark and captivating. I absolutely adored the legends we got to read that separated each part of the story. I also really liked how much more time we got to spend in the world. Ace of Shades happened over the time period of a week or so but King of Fools happens over a period of months and I think that was good because so much happened. We learned so much about the world and the politics, things that needed to take time. It was paced nicely, though some of the time jumps were a little awkward.

The characters were something else that I think were done well. They really developed in this book. They are all dealing with change and chaos and it really helps show each character’s true colors. Levi is complicated. Can’t have what he really wants, always seems to be disappointing his friends, taking risks at the expense of others. He says he learns from his mistakes but doesn’t hesitate to repeat them. I loved him anyway. He’s confident and clever. I’m very interested to see what’s going to happen with him in the final book. His best friend Jac was probably my favorite. He’s off on his own little side mission most of the book and I really related to him. He’s doing his part to help Levi while also doing his best to fight his own demons. Then there’s Enne. I didn’t love her in the first book but I do now. I feel bad for the way things ended for her, but I really grew to love her. She’s smart and (mostly) unapologetic. She took New Reynes by storm, her and her girl gang. The girl gang was absolutely my favorite. Lola was totally relatable in the sense that I talk a big game and wear a big bad face but really, I’m a cinnamon roll on the inside. And Grace, who has a counting ability but would rather be out killing someone. She’s brilliant and fierce and I totally adored her. There are so many more I could mention; we get quite the cast of character but I’ll stop here.

I do want to mention the villain or villains. I thought it was very interesting that there was one big bad villain, but the whole time we’re left wondering if she’s the one we really should be worries about or if there’s another big bad.

“Because the hero of one story is the villain of someone else’s. It’s all just a matter of who wins.”

Finally, the freaking ending. I was devastated. I almost threw my phone across the room because of certain things that happened toward the end of the book. I am hoping for some sort of explanation that makes it all go away in the third book, but I’m not confident that I’ll get it. Amanda Foody really hit me where it hurt in King of Fools.
I really enjoyed this book and I cannot wait until the third book is out. Sadly, I have a long wait. But I know it will be worth it. I cannot wait to meet Amanda Foody in May and tell her just how much I loved this story.