GoodReads Summary:
Four young ladies at the side of the ballroom make a pact to help each other find husbands… no matter what it takes
Proud and beautiful Annabelle Peyton could have her pick of suitors—if only she had a dowry. Her family is on the brink of disaster, and the only way Annabelle can save them is to marry a wealthy man. Unfortunately her most persistent admirer is the brash Simon Hunt, a handsome and ambitious entrepreneur who wants her as his mistress.
Annabelle is determined to resist Simon’s wicked propositions, but she can’t deny her attraction to the boldly seductive rogue, any more than he can resist the challenge she presents. As they try to outmaneuver each other, they find themselves surrendering to a love more powerful than they could have ever imagined. But fate may have other plans—and it will take all of Annabelle’s courage to face a peril that could destroy everything she holds dear. 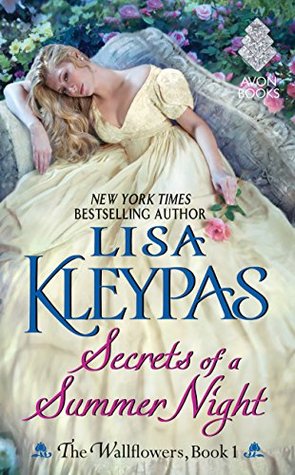 Review:
I used to read Lisa Kleypas in high school. But it’s been many years since I’ve read any of her books. After reading some newer historical romance I decided I wanted to try some of the historical romance that I loved in my younger years. This was one of those.
I thought this story was fun. It was definitely entertaining. I love the concept of the wallflowers befriending one another and coming together to help each other catch husbands. The friendships of these four girls was most definitely my favorite part of the story. These girls are hilarious and outgoing and they make each other more confident. I’m continuing this series 100% for the friendship of the wallflowers.
The romance was actually pretty good in this book too. It’s an enemies to lovers story that follows Annabelle as she’s in her last season and desperate to get a husband to hopefully pull her family out of financial ruin. I think that’s what made me not hate her motivations. She’s only doing this for her mother and her brother. But the romance was pretty good. It was well developed and I really enjoyed seeing the couple fall in love even though they both really didn’t want to. I also enjoyed seeing Annabelle end up in a marriage that is very different from what she’d planned for her entire life. Simon Hunt is a businessman and not a part of the peerage. So, he doesn’t run in the circles that Annabelle’s hoping to become a part of. This was an adjustment for her and I think made the book that much better.
Overall, this was a fun and entertaining read. I liked the romance and the friendships were excellent. There were some great steamy scenes and I just all around had a good time reading this book.