GoodReads Summary:
Kate Harker is a girl who isn’t afraid of the dark. She’s a girl who hunts monsters. And she’s good at it. August Flynn is a monster who can never be human. No matter how much he once yearned for it. He has a part to play. And he will play it, no matter the cost.
Nearly six months after Kate and August were first thrown together, the war between the monsters and the humans is a terrifying reality. In Verity, August has become the leader he never wished to be, and in Prosperity, Kate has become the ruthless hunter she knew she could be. When a new monster emerges from the shadows—one who feeds on chaos and brings out its victim’s inner demons—it lures Kate home, where she finds more than she bargained for. She’ll face a monster she thought she killed, a boy she thought she knew, and a demon all her own. 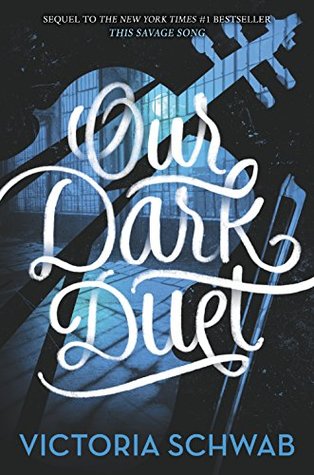 Review:
Our Dark Duet was the perfect ending to this duology. It did such a great job of answering all the questions I was left with at the end of This Savage Song. The story is dark and gritty and full of things that you don’t really want to think or talk about. It’s full of important themes, violence and crime, what it means to kill someone, and how the lines can be blurred when it comes to murder. Schwab wrote a beautiful story about a really challenging topic.
I still adore Kate. She’s a fierce woman, a force of nature. She’s left Verity to start over somewhere new. But of course, in her mission to hunt down the monsters, she’s led right back to her home. Only, her home is nothing like it was when she left. I really enjoyed her part of the story. Her struggle to keep this new monster at bay and her desire to take down the evils she had created. I really loved Kate.
Verity was not the only thing that was almost unrecognizable. August was not the same character that we met in This Savage Song. He’s lost himself, his more human side, after the things he’s had to do. I think the dynamic between Kate and August was my favorite part. They seem to bring out the best in one another. I really liked them together as a team.
Overall, I have nothing but good things to say about this book. I enjoyed every page. The writing was beautiful. The characters were developed and likable. The story was compelling and fast-paced. It’s a new favorite for sure.