Summary:
The Zeroes are in disarray.
One of them has vanished. One of them is in prison. The rest are on the most wanted list. And something big is brewing.
Accused of murdering Swarm, Bellweather is in a high security prison, isolated and unable to use his powers of influence. Flickers, Crash, Mob, and Scam are on the run as suspected domestic terrorists. And Agent Phan of the FBI has a secret weapon up his sleeve—a teenager with a superpower that the Zeroes haven’t encountered yet.
After a daring breakout, the group is drawn to New Orleans, where celebrating Mardi Gras crowds promise enormous power to anyone who can channel it. There, an army of Zeroes is gathering around a charismatic leader—whose plans are nothing short of cataclysmic.
Time is running out for the Zeroes, but they must learn to trust one another again to avert the looming disaster, in this action-packed conclusion to the NYT bestselling trilogy. 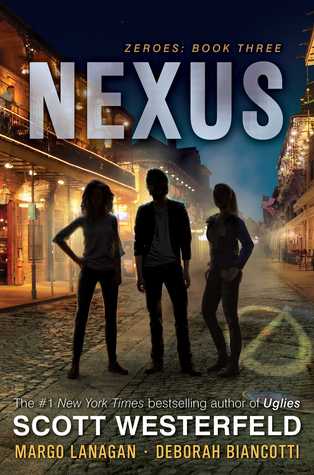 Review:
I just finished this book and I can’t help but say that I am deeply unsatisfied with the last ten pages or so. But I will get to that at the end of this review. This story starts pretty much right where book two left off. It starts right in the thick of things which I really enjoyed. It was fast-paced almost the whole way through right up until the ending. Which I will talk about at the end.
My feelings toward the characters are mostly the same as they were for book two. Though I think I like Scam a bit more. He seems to have gotten over being whiney and complaining so much. I think that’s due to the girl he likes, which is a relationship I’m totally here for. Bellweather seems to lose his way in this conclusion but then brings himself back in the final chapters. I don’t really feel too strongly one way or the other about him. I’m glad he didn’t turn evil, but aside from that I just don’t care that much about him. I’m still obsessed with my two favorites, Flicker and Anonymous. Crash really had an interesting storyline. She meets others with her ability and learns just how far she can push her powers. I thought she was really interesting. Mob is still fighting the battle to not become Swarm. Which was alright, but could have been more interesting. I liked her for her desire to stay good. I also enjoyed her trying to find her mother. That was interesting.
I really enjoyed the representation in this series. There was a female/female romance. There are characters of all the different races. There is a character that is blind. I think there was a pretty well-rounded group of characters in this series.
Now, the ending. I can understand why it was done this way. But I wanted more. I wanted more from the last 50 pages or so. The ending seemed a little too rushed to me. I think there could have been another book in the series or at least add another 100 pages to this conclusion. I think things were wrapped up too quickly. And the final two chapters were infuriating. We barely get a blip from each character after the big to-do that happens. Then the final chapter was just not enough for me.
Overall, despite not liking the ending, I really enjoy this book and the series as a whole. I will definitely reread it in the future. I’d also definitely recommend it to anyone that enjoys books with superpowers and superheroes of any sort.

Top Ten Tuesday is a weekly meme now hosted by That Artsy Reader Girl. Each week we’re given a new prompt for a top ten list of all things bookish. This week is top ten series I gave up on or do not plan to finish. This is going to be a bit of a challenge for me because I rarely give up on books. So let’s see what I can come up with this week. Okay, so after coming up with an insufficient list I’ve decided I’m going to do a few series that I will definitely be finishing, but haven’t managed to get around to it yet.

1. House of Night by P.C and Kristen Cast – This series just had so many books. It got to the point where it was hard to keep up with the story and when new books came out. So I just stopped trying to stay on top of it. Now they’re coming out with books again and I just don’t think I’ll ever get around to rereading them all.
2. Outlander by Diana Gabaldon – I read the first four books in this series. I borrowed them from Antonia’s mom. But I ended up losing the fourth book and by the time I bought a new copy she had caught up to me and needed the books back for her to read them. I may eventually pick this series up again, but I have no real burning desire to do so anytime soon.
3. The Bridgerton series by Julia Quinn – These books were another series that I had a hard time keeping up with. There are so many books and I just lost track of which ones I’ve read and still need to read. I may pick them up again because I did really like the books, but it’s not high on my priority list.
4. The Women’s Murder Club by James Patterson – Once again, too many books coming out to keep track of. I will eventually read these again because they’re easy mystery reads but it won’t be anytime soon.
5. The Princess series by Alexa Riley – I just was not impressed by these books. I think I only read the first and part of the second before giving up.
6. The Red Queen series by Victoria Aveyard – The final book in the series came out recently and I’d like to reread the whole series. When am I going to do that? Eventually, my TBR list seems to just keep growing instead of getting smaller.
7. The Talon series by Julie Kagawa – Again, the final book in this series was finally released and I’m planning to reread the entire series, eventually.
8. Zeroes by Scott Westerfeld – A few weeks ago, I learned that the third book, Nexus, was released sometime last year and I didn’t even realize. So I need to buy this and get around to finishing the series.
9. Millennium series by Stieg Larsson / David Lagercrantz – Literally just now while looking for books to add to this post learned that another book has been released in this series. I will read it, but when I get around to it and who knows when that will be.
10. Shadow Falls series by C.C. Hunter – I finished the main series of these books; I actually own all of them. But there’s a few spin-off series with other characters that I haven’t managed to get around to reading yet, but I definitely plan to.

This is my top ten for this week! What series have you given up on?