GoodReads Summary:
Two identical girls, one a princess, the other a rebel. Who will rule the empire?
After being swept up into the brutal Vathek court, Amani, the ordinary girl forced to serve as the half-Vathek princess’s body double, has been forced into complete isolation. The cruel but complex princess, Maram, with whom Amani had cultivated a tenuous friendship, discovered Amani’s connection to the rebellion and has forced her into silence, and if Amani crosses Maram once more, her identity – and her betrayal – will be revealed to everyone in the court.
Amani is desperate to continue helping the rebellion, to fight for her people’s freedom. But she must make a devastating decision: will she step aside, and watch her people suffer, or continue to aid them, and put herself and her family in mortal danger? And whatever she chooses, can she bear to remain separated, forever, from Maram’s fiancé, Idris? 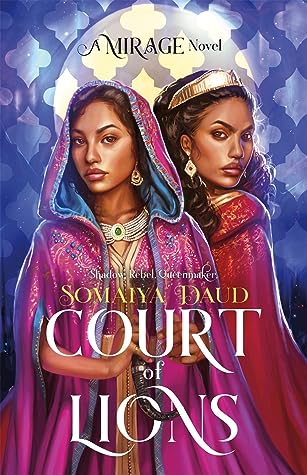 Review:
Court of Lions was a 2020 anticipated release I didn’t even know about until August (when I finally read Mirage). Book two starts right where the first left off. I don’t want to spoil the first book because if you haven’t read it you need to stop what you’re doing and go read it now. I listened to audiobooks for the whole series and they were incredible. There were lots of names and worldbuilding things that I would have had trouble pronouncing correctly and the narrator did a wonderful job. She really put emotions into each character and the story. I highly recommend them.
The story starts with Amani being called to Maram for the first time after Maram found some information about Amani’s activities in the first book, and she was not happy about it. This break of trust between the two was so sad for me. They had finally gotten to such a good place. They trusted and confided in one another. I was sad to see that be lost. But on a more positive note, they gained this closeness back. The relationship between Maram and Amani was my favorite thing about this book. The two figured out how to get past Amani’s breaking Maram’s trust and they become as close as sisters. Seeing these two finally work together toward the same goals made me so happy. Seeing them work together to gain allies (and get Nadia out of the way) and work toward a better future for their planet.
Maram had incredible growth. She spends time really learning about her heritage that comes from her mother. I loved seeing her get away from her cold and cruel persona that she wears to prove she is Vathek enough. She’s embracing her mother’s side and it was so great. I loved learning about it as Maram did. I also really loved Maram’s love interest. We really get to know her on a deeper level once the love interest is introduced. Maram shows a completely different side from anything we’ve seen before and I loved it.
Amani’s story focuses on bettering her relationship with Maram. But she also gets a very complicated romance that’s continued from the first book. She battles with her feelings for Idris who is actually Maram’s fiancé (and eventually husband). Pretending to be Maram and Idris’ wife was a difficult task for her because she cared so much for him. It was interesting to see her battle her feelings for him versus what she thought was the right thing to do. I also adored Amani because she has an incredible mind for the politics of the world. We get to follow Maram and Amani as they tour the world after the wedding and I loved getting to see more of this culture. It was beautiful and fascinating. Amani is the mastermind behind all of Maram’s moves, but once the two and Idris start planning together my heart was singing.
This story started with many very unhappy people, but by the end of this book, they are all (mostly) put back together. This is a story of exploring your roots and your history. It’s a story of figuring out who you are and what you want and getting those things that you wanted, that you dreamed of having. I loved every page of these characters finding their way together, to friendship, and to love. I cannot say enough how much these characters and this story weaved its way into my heart. The writing was beautiful and took me right there, into this world, the drama, the politics, and the emotions. This series will definitely be making my 2020 favorites list.

“All of us have suffered one loss of another. All of us live in the shadow of that. And those losses do not absolve us of the choices we make.”

“Sometimes,” she said contemplatively, “all the paths lead where we would rather not go. Sometimes you can’t outrun home or destiny.”

“It’s not about the teller,” I said. “But the fortune. Good or ill, true or false, it haunts the listener.”

GoodReads Summary:
In a star system dominated by the brutal Vathek empire, eighteen-year-old Amani is a dreamer. She dreams of what life was like before the occupation; she dreams of writing poetry like the old-world poems she adores; she dreams of receiving a sign from Dihya that one day, she, too, will have adventure, and travel beyond her isolated moon.
But when adventure comes for Amani, it is not what she expects: she is kidnapped by the regime and taken in secret to the royal palace, where she discovers that she is nearly identical to the cruel half-Vathek Princess Maram. The princess is so hated by her conquered people that she requires a body double, someone to appear in public as Maram, ready to die in her place.
As Amani is forced into her new role, she can’t help but enjoy the palace’s beauty—and her time with the princess’ fiancé, Idris. But the glitter of the royal court belies a world of violence and fear. If Amani ever wishes to see her family again, she must play the princess to perfection…because one wrong move could lead to her death.

Review:
Mirage is a book that I let sit on my bookshelf for entirely too long. I absolutely loved this story. The book follows Amani as she is taken from her home and brought to the royal palace because she looks just like the Princess. Maram is not a very popular princess, so Amani is trained to behave exactly like Maram would and to know everything that Maram knows. It was hard not to feel bad for Amani. She’s been taken from the only life she’s known and thrown into the vicious world of the Vathek. The longer she’s with Princess Maram though, the better she gets to know her. I ended up feeling bad for Maram too. She’s only half-Vathek, so her struggle is that her mother’s people hate her because she’s Vathek and the Vathek people think less of her for her other half. I love Maram because we got to see growth. Though the ending sort of messed that up, but I’m very excited to see what will happen with her in the next book. Amani is thrown into a world where she’s mostly over her head. But she manages to make friends with some of the people in Maram’s life that Amani’s supposed to be fooling. I really liked when Amani visited Maram’s grandmother. That’s really when the story started to get really good. I mean, it was enjoyable the whole time, but the pace of the story really sped up around here.
Overall, I adored this book. It was a diverse story and the only thing that would make it better would be for Maram and Amani to fall in love. I loved the world, but I’m hoping we get to see more of it. There was also a romance and I totally wasn’t as invested in it as I thought I’d be. They were alright together, but I knew it wouldn’t end well as soon as it started. Anyway, definitely go read this book it was great.

“You are lucky”, she said. “Me?” “You know where you belong. You have your family and your traditions, no one is…is screaming at you to be something else.”

“When night falls, come and visit me, For I have seen night keeps secrets best.”

“A cage is a cage even if gilded.”