GoodReads Summary:
When we moved to West Virginia right before my senior year, I’d pretty much resigned myself to thick accents, dodgy internet access, and a whole lot of boring… until I spotted my hot neighbor, with his looming height and eerie green eyes. Things were looking up.
And then he opened his mouth.
Daemon is infuriating. Arrogant. Stab-worthy. We do not get along. At all. But when a stranger attacks me and Daemon literally freezes time with a wave of his hand, well, something… unexpected happens.
The hot alien living next door marks me.
You heard me. Alien. Turns out Daemon and his sister have a galaxy of enemies wanting to steal their abilities, and Daemon’s touch has me lit up like the Vegas Strip. The only way I’m getting out of this alive is by sticking close to Daemon until my alien mojo fades.
If I don’t kill him first, that is. 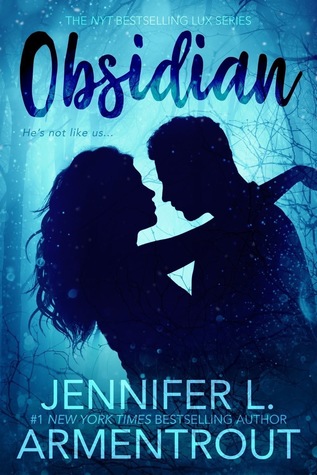 Review:
This book will always hold a special place in my heart. It’s the reason that Antonia and I started this very blog. We were inspired by the main character, Katy, who was a book blogger. We read this and thought, “What if we did that?” And so, Classy As F*ck Book Reviews was born. I have to shout out a thank you to the Trashback Book club for prompting me to reread this book this month. Each month we read a paranormal book from the early 2000s. And it’s honestly been so bad but so much fun.
This book objectively was not great. I enjoyed it immensely, for mostly nostalgic reasons. But I enjoyed it nonetheless and I’m excited to reread the rest of the series.
I still loved Katy in all her book blogging and gardening nerdiness. She was fiery and fierce even when she just wanted to escape into her current read or go home and get her book mail.
Daemon is trash and I love him for it. The hate to love trope is strong inn this one. I loved every page of Daemon and Katy bantering and swearing at each other. He’s such a jerk and I’m honestly so here for it.
Then there’s the whole aliens of light thing. Very interesting but also bizarre. I don’t remember as much as I would like to about the rest of the series so I’m in the dark about a lot. I’m interesting to relearn what has happened to Dawson and what will happen next with Katy and Daemon.
This book was honestly not great, I loved it despite its flaws. I have to say, also,  that I’m totally obsessed with  the new covers for this series. They were redone  to  match w ith the  cover of The Darkest Star (the spin off series) and I love them so much.

It feels like forever since I’ve posted a Top Ten Tuesday. (Probably because it has…) For those of you who are new to it, it’s a meme hosted by The Broke and the Bookish. This week’s prompt is top ten sequels I can’t wait to get my hands on.
I ended up only doing nine because any other books I can think of at the moment aren’t part of a series.

1. The 2nd book in the Dragon Prophecy Trilogy by Mercedes Lackey and James Mallory- There is no release date… There isn’t even a title… But this book will come out eventually and when it does I will have it immediately.
2. Age of X Book 2 by Richelle Mead- This book also has no title or release date. The first came out pretty recently though so some information will hopefully be released soon. The first book left me with so many questions that I desperately need answers to.
3. Opposition by Jennifer L. Armentrout- August 15, 2014 ………The end of the previous book was not even close to being okay. It may be physically and mentally impossible to wait until next summer for this book.
4. Fiery Heart by Richelle Mead- November 19, 2013 TWO WEEKS!!! I can’t contain my excitement for this book. This series literally makes me feel so many emotions that I might spontaneously combust.
5. The Sum of All Kisses by Julia Quinn- Apparently, this book is already out. I thought it came out in a few weeks; but when I was checking the release date it said October 29. So I’m going to have to make an emergency trip to the library tomorrow…
6. Three Weeks With Lady X by Eloisa James– March 25, 2014 I am super excited about this book. I was introduced to Eloisa James through her Desperate Duchesses series which has long since been over. Until now. This book is loosely connected to the original series. The male main character is the firstborn son of my favorite character from the first series.
7. Son of No One by Sherrilyn Kenyon- September 2, 2014 It is impossible for me to not read one of her Dark Hunters books. I love them all. I can’t help myself.
8. Vampire Most Wanted by Lynsay Sands- February 18, 2014 I need to catch up on this series a bit, but she’s one of my autobuy authors. Her books are like my guilty pleasure.
9. Revealed by P.C. and Kristin Cast- This is already out but, like Amanda, I haven’t had a chance to read it yet. The House of Night series is one of the first that Amanda and I shared so we’re particularly attached to them, even if the series dragged out a bit more than I think it should have.

So those are my picks. Let me know if you share any of these choices or any different ones you might have. Do you prefer reading series or standalone books? I like both equally but would love to hear everyone’s opinions.
-Antonia