GoodReads Summary:
Seven days. Seven days. The Earth might end in seven days.
When news stations start reporting that Earth has been contacted by a planet named Alma, the world is abuzz with rumors that the alien entity is giving mankind only few days to live before they hit the kill switch on civilization.
For high school truant Jesse Hewitt, though, nothing has ever felt permanent. Not the guys he hooks up with. Not the jobs his underpaid mom works so hard to hold down. Life has dealt him one bad blow after another — so what does it matter if it all ends now? Cate Collins, on the other hand, is desperate to use this time to find the father she’s never met, the man she grew up hearing wild stories about, most of which she didn’t believe. And then there’s Adeem Khan. While coding and computer programming have always come easily to him, forgiveness doesn’t. He can’t seem to forgive his sister for leaving, even though it’s his last chance.
With only seven days to face their truths and right their wrongs, Jesse, Cate, and Adeem’s paths collide even as their worlds are pulled apart. 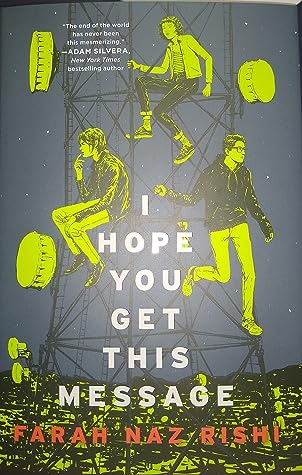 Review:
I was taken in by the cover for this book. Then I read the synopsis and I was sold. Sadly, I found the story a bit lacking. We follow three characters, Cate, Jesse, and Adeem in the final seven days of humanity’s life (or not).
I liked Cate. She was doing her best to take care of her mom, but when her mom commits herself to a psychiatric hospital to get the help she needs, Cate finds herself on a mission to find a dad she’s never met. I liked how much she loved her mom. I liked her friendship with Ivy. But even more, I enjoyed seeing her get out of her comfort zone and do something for herself for once.
Adeem was probably my favorite. He’s searching for his sister that left home after coming out to her parents. He hasn’t heard from her in years and now that the world is ending, wants to find her. I thought his internal struggle was done really well. He was kind of a jerk at times, but I thought it was realistic.
Jesse was a character I didn’t like at all. He steals and lies and is just all-around unpleasant. People keep trying to reach out and connect with him, but he shoves them all away. I really didn’t like him. I wanted him to redeem himself, and he sort of did, but he was still a jerk.
Now, the ending is what really made me mad. We get these in-between bits of the planet that created humanity debating whether or not to kill off all humans or not, and then the sunrise of day seven comes and there’s no resolution. We don’t know if everyone lived or died and I hated it. On top of that, we’d just found out some really interesting connections between some of the characters and none of that was explored. It was just dropped into the story and not talked about again.
Overall, I think this book was doing too many things. It covered mental health in several different ways, LGBTQIA topics, the corruptness of humanity, and I was left unsatisfied with many of them. I think it was trying to talk about too many things and ended up inadequately talking about them all. While I had fun reading this book, the ending most of all is what ruined it for me.