GoodReads Summary:
Hollywood powerhouse Jo is photographed making her assistant Emma laugh on the red carpet, and just like that, the tabloids declare them a couple. The so-called scandal couldn’t come at a worse time–threatening Emma’s promotion and Jo’s new movie.
As the gossip spreads, it starts to affect all areas of their lives. Paparazzi are following them outside the office, coworkers are treating them differently, and a “source” is feeding information to the media. But their only comment is “no comment”.
With the launch of Jo’s film project fast approaching, the two women begin to spend even more time together, getting along famously. Emma seems to have a sixth sense for knowing what Jo needs. And Jo, known for being aloof and outwardly cold, opens up to Emma in a way neither of them expects. They begin to realize the rumor might not be so off base after all…but is acting on the spark between them worth fanning the gossip flames?

Review:
Something to Talk About follows Jo and Emma who work together. Emma is Jo’s assistant. After Jo invites Emma to an awards show and they’re seen on the red carpet together. From there the rumors are relentless. Jo is a pretty well-known woman, but she’s never commented on her love life before and doesn’t plan to do so now. Emma doesn’t totally understand this, but she goes with it.
I think what I loved most about this book was the slow burn. It’s not totally clear if they have feelings for one another, even to themselves. I think I just really enjoyed Jo and Emma figuring out their feelings they hadn’t realized were there until the rumors started. I also loved their passion for work. Jo is a writer (I think also a producer) and Emma is her assistant. Emma loves her job, which complicates her feelings.
I also really loved the family aspects of the story. Emma’s sister was great. I loved that both Emma and Jo made sure to make time for their nieces and nephews. I loved that they all got together to watch the kid’s sports games.
Overall, this was a really fun romance. I really liked both Jo and Emma, as a couple and as individuals. I liked that they knew one another so well. I enjoyed their banter and the fact that they just liked to be around one another before either of them even realized they had feelings. I just all around enjoyed this book.

GoodReads Summary:
Four girls. One unforgettable July.
Britta is the bubbly drama queen. She needs to get away—and a peaceful cabin in the woods sounds like the perfect escape.
Meredith is the overachiever. She’s spent her entire life preparing for college, but at what cost? Now she’s wondering if that’s all there is.
Kate is the reluctant socialite. She’s searching for a reason to begin again after fleeing her small Georgia town—and a shameful family secret.
Spider is the quiet intellectual. She’s struggling with pain that has isolated her from her peers for much of her life.
When these four very different young women stay together for a month in the mountains, they discover that sometimes getting away from it all can only bring you back to who you really are. 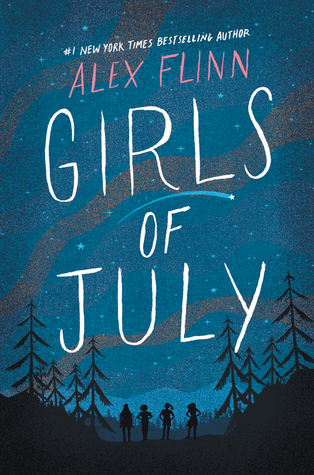 Review:
Alex Flinn has been an auto-buy author for me for years. She’s one of Antonia’s absolute favorite authors. So, when I saw she was coming out with a new contemporary novel, you could say I was excited. This was the first book I picked up for the Litha Witch-A-Thon because I just had to get into it as soon as possible.
In Girls of July, we follow four girls that are growing up and trying to figure out who they are and what they really want from life. They find themselves together in a cabin in the mountains. At first, they were all pretty unlikable characters except for Ruthie, the grandmother. The four girls, Britta, Kate, Meredith, and Spider, are all at points in their lives where they need change, even if they don’t know that they need it.
I really enjoyed seeing the four of them figure out how to live together and be around each other 24 hours a day. As the story progressed, they learned more about one another and became more likable characters. I really liked that they all had their own distinct voices. There was no confusion when going between the four perspectives.
We have Meredith, the Brainiac who’s not sure if she’s chasing her own dreams or her parent’s dreams. She finds romance and a new appreciation for nature. She learns that the things she thought she wanted may not have been her own dreams. The only thing I didn’t like about Meredith was that she gets a little lost in her romance. Don’t get me wrong, I loved the romance. But I thought it was going to be more of the girls being friends together.
Then there’s Kate. Southern belle, comes from a wealthy family, just trying to live up to her parents’ expectations. Except, she doesn’t want to live the future that they have planned for her. Instead, she spends the summer babysitting a little boy, giving help to someone that doesn’t want to accept it. Kate learns that sometimes asking for help is okay. I think Kate was the most likable at the beginning. She has a big heart and loves pretty freely. She struggles with family issues but comes out on top. I think she really learned the most this summer.
Britta, our Cuban firecracker. I loved that her culture was included in this story. We see her trying to teach the other girls (Spider) how to cook. She doesn’t shy away from who she is even if that is a loud and enthusiastic girl that not everyone likes. She grew the least I think. She learns that she needs to be honest with her mother. As much as I liked Britta, I was a little disappointed with the ending of her story. I would have liked a little more resolution with her mom.
Finally, Spider. She was the most unlikable. She’s the one that put the ad for roommates at her family’s cabin. But she was so grumpy and negative the first chunk of the book I wondered why she even bothered. But that question was answered. Spider is an aspiring filmmaker which is incorporated into the story. Her and Britta spend most of their time working on a short movie project and the two really bond. Spider lives with juvenile idiopathic arthritis. I think her story was such a good one. It really showed how strong she was and that she wasn’t just her illness. Spider has goals and dreams and I really grew to like her.
Overall, I liked this book just as much as I thought I would. Four girls that don’t know each other go into a cabin for a month and come out as lifelong friends. I think this story was so good. There were a diverse group of characters some rich, some not, some of color, some not, and one struggling with a lifelong illness. I also want to vaguely mention that there is talk of a female/female relationship but I can’t give too many details without spoiling anything. I love that these girls had adventures and learned things. I enjoyed reading this story so much. It’s almost five hundred pages and I read it all in one day. I would certainly recommend this to anyone that loves contemporary books. Plus, it has an absolutely stunning cover.