GoodReads Summary:
Gujaareh, the city of dreams, suffers under the imperial rule of the Kisuati Protectorate. A city where the only law was peace now knows violence and oppression. A mysterious and deadly plague now haunts the citizens of Gujaareh, dooming the infected to die screaming in their sleep. Someone must show them the way. 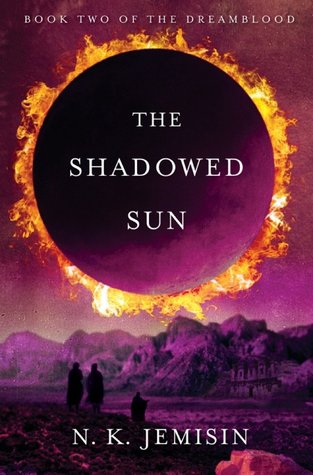 Review:
The Shadowed Sun is the second book to the Dreamblood duology, but this book is set ten years after the first. I had the same problem that I did with the first book. It took me about 100 pages to actually get into the story and care about what was going on. I think what was weird for me was that I felt like this book could be read completely separate from the first book and the reader wouldn’t really miss much.
In this book, the city we came to know is pretty different. The characters we’re following is also different. Gujaareh is being ruled by the Kisuati Protectorate. One of the Kisuati that’s left in charge of Gujaareh is a character from the first book. I really liked her for this whole book. She stood up for what she thought the right thing was, even when that wasn’t always what she was ‘supposed’ to believe.
In this new Gujaareh, there is a nightmare plague going around that the Hetewa can’t figure out. I really liked that as the reader we got to know what was going on with this aspect of the story. I also liked that we got to see more of the world. Two of the Sharers are sent on a mission to work with the rightful heir to Gujaareh. This was definitely the most interesting part of the story. Getting to see the Shares out of their comfort zone and getting to know a bit more about the desert tribes was really interesting.
Jemisin did such an incredible job building the world for this series. I thought this world was so interesting. I really liked learning about the different customs of the desert tribes but I also still really enjoyed the customs and faith of Gujaareh.
Overall, I enjoyed this book. I still had a hard time getting invested in the characters. I think it was definitely easier in this book because I was familiar with the world and a few of the characters. I am very excited to read The Hundred Thousand Kingdoms series, as that’s the only books of Jemisin’s that I haven’t read yet.