Top Ten Tuesday is a weekly meme now hosted by That Artsy Reader Girl. Each week we’re given a new prompt for a top ten list of all things bookish. This week’s topic is – Top Ten Books That Awaken the Travel Bug in me. I’m excited about this topic because I love to travel. I’m going to try to pick books that are based in the real world instead of book worlds I’d love to travel to. So, here goes! 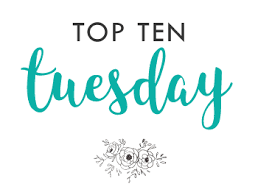 1. Twenty-Nine and a Half Wishes by Denise Grover Swank – This series takes place in a small town in the south. I haven’t spent much time in the south, but these books make me want to go explore all the little out in the woods towns in the south.
2. The Lawless Saga by Tarah Benner – These four books start off in a prison in New Mexico and throughout the books, the characters move all around the south, from Colorado to Texas and back a few times. Even though this series is set in the distant future where the world is ruined due to lack of water and natural disasters and things of the like, it still gives me the travel bug because of all the traveling the characters do.
3. Dragon’s Gift Collection by Linsey Hall – So this collection is four full series and Hall just started on the fifth series, each following a different character. While much of these books take place in other realms, the characters do lots of traveling throughout the U.S and parts of Europe and I’ve always wanted to travel to Europe.
4. The Origin Mystery Series by A.G. Riddle – This is a series I read over the Christmas holidays while I was mostly dying in bed with the flu (also pregnancy nausea, but I didn’t know that yet.) So this series, where the characters travel literally the entire world, was great for me to escape my sick bed and travel from Antarctica to Italy to Africa and the oceans in between.
5. Agent of Enchantment by C.N. Crawford and Alex Rivers – There are four books in this series and they all take place in London, England which is somewhere that’s been on my dream travel destination list for legitimately my whole life. So I loved every page of getting to run through the streets of London with Agent Cassandra Liddel. (But also the parts in the Fae realm were pretty cool too.)
6. The Dominion Trilogy by Joe Hart – This is an incredible trilogy where our main character is trapped inside a facility in the first book and escapes. The next two books give the travel bug for sure while she makes her way around the country, hiding from those who seek to put her back where she escaped from. This series is dystopian, so the world isn’t as we know it now, but we still get to see enough to make me want to go out and explore.
7. Paper Towns by John Green – Am I even allowed to say I’m a John Green fan if I don’t include this on my list? The characters go on a big road trip adventure to find Margo Roth Spiegelman. Road trip, says it all.
8. Shadows of the Immortals by Marina Finlayson – This is another series where the characters do tons of traveling. We start in a small town where our main character Lexi is hiding out, but once she’s been found out we get to see a few different cities, including the Underworld.
9. Outlander by Diana Gabaldon – So I only read the first few books in this series, in the books I did read the characters traveled all over Ireland and Scotland. They also traveled through time, but that’s beside the point.
10. The Guardian Trilogy by Nora Roberts – I loved this trilogy (but I love most of Nora’s books). Our characters start off in Greece in the first book, moving next to the island of Capri and then to Ireland in the last book. These are three places I would die to visit. Roberts makes the perfect setting with these stories that for sure makes me want to visit.

This is my Top Ten this week! Books that give me the travel bug set (mostly) in the real world.
Keep on reading lovelies, Amanda.