Summary:
Nina continues to learn how to use her slayer powers against enemies old and new in this second novel in the New York Times bestselling series from Kiersten White, set in the world of Buffy the Vampire Slayer.
Now that Nina has turned the Watcher’s Castle into a utopia for hurt and lonely demons, she’s still waiting for the utopia part to kick in. With her sister Artemis gone and only a few people remaining at the castle—including her still-distant mother—Nina has her hands full. Plus, though she gained back her Slayer powers from Leo, they’re not feeling quite right after being held by the seriously evil succubus Eve, a.k.a. fake Watcher’s Council member and Leo’s mom.
And while Nina is dealing with the darkness inside, there’s also a new threat on the outside, portended by an odd triangle symbol that seems to be popping up everywhere, in connection with Sean’s demon drug ring as well as someone a bit closer to home. Because one near-apocalypse just isn’t enough, right?
The darkness always finds you. And once again, it’s coming for the Slayer.
Review: 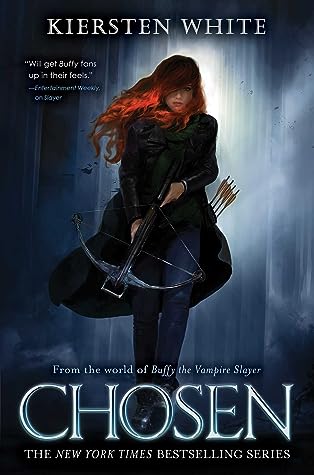 Chosen is the sequel to Slayer. It’s White’s continuation of the Buffy the Vampire Slayer world. You can find my review for the first book here. I was never huge into the Buffy show, but I’m a sucker for vampire books. I also really enjoy White’s books and this series is no different.
Nina is dealing with a lot when this book opens. Her sister has left, the guy she had a crush on died, and life at the Watcher’s Castle has changed. They have changed their mission of killing demons indiscriminately and instead have been working on making the castle a sanctuary. Now, I feel like that’s all I can say about the plot so that I don’t spoil things.
Nina is struggling emotionally, but also physically because of her Slayer abilities. Much of this book was Nina trying to internally work through her emotions and the things she went through in the first book. I think Nina showed a lot of growth by the end of this book. I don’t know how to get into it without giving anything away. But she doesn’t always make the best choices, she’s reckless, and sometimes that leads to her learning things that will hurt her. But she grows from that and I really liked that.
Overall, this was a fun story, but it also covered important things, like mental health and how family relationships can change. I definitely wanted to watch Buffy again after reading this book. I really enjoyed all the lore and fantasy elements (like the demons). The friendships were also enjoyable. There were a few things that I predicted before they were revealed, but that didn’t diminish my enjoyment of the story.