GoodReads Summary:
When Moira Dreyfuss’s parents announce that they’re sending her to boarding school, Moira isn’t fooled. She knows her parents are punishing her; she’s been too much trouble since her best friend Nathan died―and for a while before that. At the Castle School, isolated from the rest of the world, Moira will be expected to pour her heart out to the headmaster, Dr. Prince. But she isn’t interested in getting over Nathan’s death, or befriending her fellow students.
On her first night there, Moira hears distant music. On her second, she discovers the lock on her window is broken. On her third, she and her roommate venture outside…and learn that they’re not so isolated after all. There’s another, very different, Castle School nearby―this one filled with boys whose parents sent them away, too.
Moira knows something isn’t right about the Castle School―about either of them. But uncovering the truth behind the schools’ secrets may force Moira to confront why she was sent away in the first place. 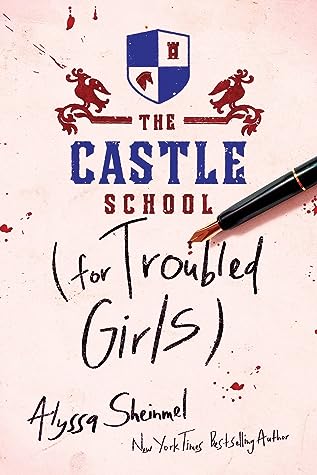 Review:
The Castle School is a book that I was provided via NetGalley and the publishers in exchange for an honest review. I think this book was so thoughtfully written. I don’t personally have experience with most of the mental illnesses that are highlighted. This book talks about depression, self-harm, grief, eating disorders, alcoholism, OCD, selective mutism, drug addiction, and others. So, if any of these are triggers for you, maybe skip this one, but I think the author did an incredible job of thoughtfully talking about these topics.
The story follows Moira as she’s dealing with the loss of her best friend Nathan. Nathan was diagnosed with cancer and died. Since then, she sneaks out at night to visit his grave, she skips school, but the final straw for Moira’s mother was the tattoo. She’s sent to The Castle School, which is a school for troubled girls where the schooling is different and Dr. Prince is there for one on one therapy sessions. Moira is full of grief that she won’t let out. I really enjoyed her growth and development in this story. She fights when she first gets to the school, thinking that she has no need to be there. But as she grows and makes friends, she opens up a bit. I couldn’t help but believe all of Moira’s wild theories about the two Dr. Prince’s one she discovers the second Castle School (for boys). I liked her and I could really sympathize with her.
I also liked the side characters. They were all unique and interesting. I really liked that we got little background stories for some of the characters. A few got their own chapters that were about when it was decided that they would be going to The Castle School. I thought they were really interesting to read and it gave us more information about the side characters.
Overall, I really enjoyed this story. I think it talked about a lot of really important topics in a thoughtful way. I think this was a really great story about young girls that struggle. I really liked the friendships and the relationships that developed. I definitely thought it was going to be a bit of a mystery because of how Moria was telling the story, but I’m not disappointed that it wasn’t. This is a book I’ll definitely be recommending.