Summary:
Robin Goodfellow. Puck. Prankster, joker, raven, fool… King Oberon’s right-hand jester from A Midsummer Night’s Dream. The legends are many, but the truth will now be known as never before, as Puck finally tells his own story and faces a threat to the lands of Faery and the human world unlike any before.
With the Iron Queen Meghan Chase and her prince consort, Puck’s longtime rival Ash, and allies old and new by his side, Puck begins a fantastical and dangerous adventure not to be missed or forgotten.
Review: 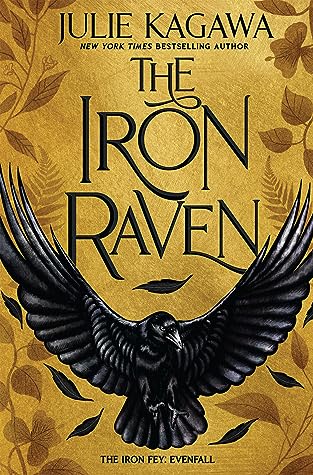 The Iron Raven is the first book in the new spin-off series, The Iron Fey: Evenfall. I am part of the blog tour hosted by the publisher (InkYard Press) so I received this eARC through NetGalley and the publishers in exchange for promotion and an honest review. Now, onto the review.
The Iron Raven is like jumping right back into the world of the Iron Fey that I know and love (I reread all the previous books in anticipation for this one). Kagawa continues with her ability to provide vivid imagery and a stunning world. I love that with each new Iron Fey story, we get to see familiar creatures, but there are also new creatures that are fascinating. I just genuinely love all of the myths that Kagawa has managed to add to this book (and series). I’m very intrigued to see where this story is going and what the secrets behind the Big Bad are.
Puck, also known as Robin Goodfellow, is the main character for this book (and I assume the Evenfall series). I was really excited for Puck to finally have his own series. He’s always been one of my favorites. His storyline is interesting. We get to see the Puck we know and love, but we also get to see the Puck of legends, the Robin Goodfellow whose pranks bordered on cruel. Puck has an inner struggle in this story that was very compelling. I’m definitely interested to see how the rest of this series will play out.
We get to see new characters, like my favorite Nyx, and some old ones as well. We see Kierran, Meghan, and Ash, as well as some other minor characters. I really liked Nyx. I’m dying to know more about her past. I think it was really interesting to have someone that doesn’t know any of the stories about Puck. I liked the bits with Kierran and I did enjoy seeing the whole gang together again, but I sort of wish that it has less of the characters we already knew (aside from Puck of course). I wouldn’t say that I disliked the whole squad being back, but I think I would have enjoyed it more if this had been a new adventure that didn’t need Meghan to come to save the day.
Overall, I still really enjoy this. I’m mostly a fan of authors coming back to their old series and continuing them. Kagawa’s writing is still excellent. With vivid world-building, fascinating creatures and mythology, and characters I already loved, I think many people will love this book.
Keep on reading lovelies, Amanda.

4 thoughts on “The Iron Raven by Julie Kagawa”