GoodReads Summary:
The author of The Gravity of Us crafts another heartfelt coming-of-age story about finding the people who become your home–perfect for fans of Becky Albertalli
Marty arrives in London with nothing but his oboe and some savings from his summer job, but he’s excited to start his new life–where he’s no longer the closeted, shy kid who slips under the radar and is free to explore his sexuality without his parents’ disapproval.
From the outside, Marty’s life looks like a perfect fantasy: in the span of a few weeks, he’s made new friends, he’s getting closer with his first ever boyfriend, and he’s even traveling around Europe. But Marty knows he can’t keep up the facade. He hasn’t spoken to his parents since he arrived, he’s tearing through his meager savings, his homesickness and anxiety are getting worse and worse, and he hasn’t even come close to landing the job of his dreams. Will Marty be able to find a place that feels like home? 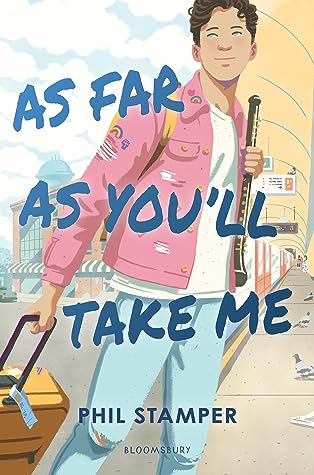 Review:
I was given an eARC from NetGalley and the publishers in exchange for an honest review. As Far As You’ll Take Me follows Marty as he moves to London, lies to his parents, makes not so great choices, and finds a place where he really feels like he could be happy.
Marty has told his parents he got accepted for a spot in a music school so that they would let him travel to and stay in London for the summer. The truth is that he bombed his audition and didn’t get accepted. But he has a plan to go anyway and get a job. He plays the oboe and is hopeful that he will be able to find a job so that he doesn’t have to move back to the mid-west to his hometown filled with people that don’t approve of a big part of who Marty is, his sexuality. So, Marty stays with his cousin Shane and meets Shane’s friends. Marty immediately feels at home in London and gets swept up in the excitement of trying new things and seeing the sights of London. He also gets swept away by Pierce.
Pierce is where the problems start. Marty is excited to have his first boyfriend, but this leads to Marty dropping most of his other priorities. I really didn’t like the romance, but that was sort of the point. It wasn’t a good relationship. This was a story centered on Marty as he tries new things, makes mistakes, learns from those mistakes, and grows so that he will try do the right thing in the future. I think Marty’s growth was natural and really well done. He does, understandably, dumb things. But when he realizes his mistakes he makes the needed apologies and asks for help.
I think this is an important story. It’s about a young man that’s discovering who he is, what he wants, and how to get there. He doesn’t always make good choices, which is the reality for many people in their formative years. I do want to specifically mention that Marty struggles with food and body image. So, at one point he’s barely eating so that he can lose weight quickly. It was very unhealthy and he knew it, but I wanted to mention it because I know that can be a triggering topic for some.
Overall, I didn’t like this as much as Stamper’s first novel, but I still enjoyed it. It’s a great story for young adults learning how to make their way in the world. I think many people will really adore this book.