GoodReads Summary:
Love, romance, second chances, fairy-tale endings…these are the things Annika Dev believes in. Her app, Make Up, has been called the “Google Translate for failing relationships.”
High efficiency break-ups, flashy start-ups, penthouses, fast cars…these are the things Hudson Craft believes in. His app, Break Up, is known as the “Uber for break-ups.” It’s wildly successful—and anathema to Annika’s life philosophy.
Which wouldn’t be a problem if they’d gone their separate ways after that summer fling in Las Vegas, never to see each other again. Unfortunately for Annika, Hudson’s moving not just into her office building, but into the office right next to hers. And he’ll be competing at the prestigious EPIC investment pitch contest: A contest Annika needs to win if she wants to keep Make Up afloat. As if it’s not bad enough seeing his irritatingly perfect face on magazine covers when her own business is failing. As if knowing he stole her idea and twisted it into something vile—and monumentally more successful—didn’t already make her stomach churn.
As the two rival app developers clash again and again—and again—Annika finds herself drawn into Hudson Craft’s fast-paced, high velocity, utterly shallow world. Only, from up close, he doesn’t seem all that shallow. Could it be that everything she thought about Hudson is completely wrong? Could the creator of Break Up teach her what true love’s really about? 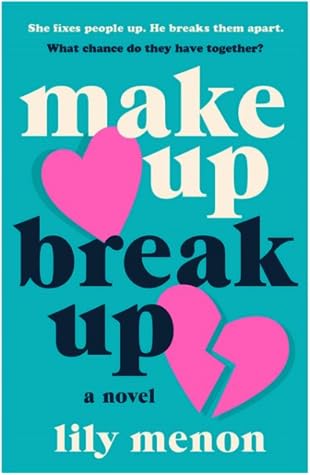 Review:
Thank you to St. Martin’s Press and NetGalley for providing me this eARC in exchange for an honest review. Make Up Break Up was a really fun (and diverse!) romance that was hate to love and an office (sort of) romance.
We follow Annika as she’s trying to get her app, Make Up, off the ground. Her concept is to create an app using an AI that will learn the people using the app to help them resolve relationship problems. It seemed to me almost like a therapist on your phone specifically for couples. I thought this was such a cool concept and I was so sad for Annika and all of the struggles she and June were facing while trying to get this project going. I loved that this was a story about a woman-owned and run company. But I also loved how Annkia’s backstory was a part of her motivation. Her parent’s love story is what inspired her idea and I thought it was beautiful.
Then there’s Hudson, a man that Annika had a short fling with, but also what she sees as her biggest rival. I knew right away that this was going to be a case of miscommunication from Hudson’s behavior. He was clearly interested in her right from when we first met him. I also liked him despite the company he owned. Break Up is an app that people use to break up with others. The person wanting to break up sends someone via the app to break up with their significant other. I thought, like Annika, there was some real potential for this app to be used callously, but I thought there was also the potential for this to be used thoughtfully. It was clear that Hudson didn’t really believe in his project anymore, just the success it was having. I liked that Hudson just seemed like a good dude (example: Annika was drunk and tried to kiss him and he declined because he didn’t want her to regret it later. Because he wanted her to want him when she was sober.)
Overall, this was a fun romance. There was drama and lots of tension. There was strong female women and really nice family aspects too. I liked that Annika’s dad was included and the development of their relationship gave me the feels. I definitely think a lot of people will like this. There weren’t super descriptive sex scenes that I enjoy, but there was still great romance and chemistry between the characters.