Summary:
Milly, Aubrey, and Jonah Story are cousins, but they barely know each another, and they’ve never even met their grandmother. Rich and reclusive, she disinherited their parents before they were born. So when they each receive a letter inviting them to work at her island resort for the summer, they’re surprised . . . and curious.
Their parents are all clear on one point–not going is not an option. This could be the opportunity to get back into Grandmother’s good graces. But when the cousins arrive on the island, it’s immediately clear that she has different plans for them. And the longer they stay, the more they realize how mysterious–and dark–their family’s past is.
The entire Story family has secrets. Whatever pulled them apart years ago isn’t over–and this summer, the cousins will learn everything. 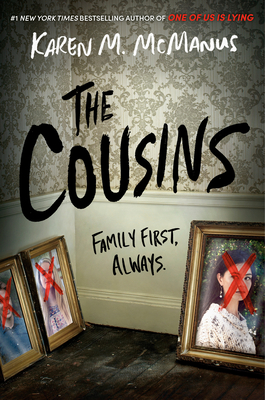 Review:
The Cousins is a young adult thriller that follows three mostly estranged cousins that work on their grandmother’s island resort, a grandmother none of them have ever met. I’ve read and loved all of McManus’s other books and The Cousins was no different. The big difference with this book was that all of the theories that I had while reading were completely wrong.
This story takes place on an island off of Cape Cod (which is where I grew up, so I was instantly sold when I started hearing places I knew.) This is the island where their parents grew up, and the place they were disinherited from, with one message, “You know what you did.” So, when the three cousins, Milly, Aubrey, and Jonah, are invited to work at the resort for the summer, everyone is surprised.
I really enjoyed this book. I loved watching Milly and Aubrey learn more about one another and develop an actual relationship aside from seeing one another at the family reunion. I thought their friendship was well done and though Milly and Aubrey were very different people, they learned about one another and about themselves. I think the character growth all around was excellent, but the growth came with the developing relationships. Milly learns about herself and grows from her interactions with Aubrey. And it was the same for Aubrey. Being around Milly and their growing friendship, she learned to be more confident. Then there’s Jonah. His part of a story was a little weird and I can’t talk about most of it because of a spoiler. So, all three cousins have secrets, but Jonah’s is the worst for the situation they are in. I liked all three of them and I think they were all distinct and well-developed characters.
As for the story and plot, I did not see the big twist coming. I had many theories as I was reading (well, listening as I read this via the audiobook). I think McManus did an incredible job of leaving the reader wanting more, wanting to know all of the secrets, and keeping them invested in the story with little bits and pieces before the big reveal. I also really liked that we get Milly’s mom’s point of view, Allison, but as a teenager growing up on the island (sort of.) We get the story of what happened that final summer before they were all disowned. I think that added a great element of suspense with the alternating chapters of that final summer.
Overall, this was a slower paced story than her previous books. I really enjoyed it. The suspense and mystery was well done, slowly revealed, but not one that I predicted. I loved the characters. Despite all being related, they were all very different. I just as a whole really liked this book. It’s one I’ll definitely recommend in the future.

4 thoughts on “The Cousins by Karen M. McManus”