GoodReads Summary:
The second book in a new fantasy trilogy from New York Timesbestselling author Kiersten White, exploring the nature of self, the inevitable cost of progress, and, of course, magic and romance and betrayal so epic Queen Guinevere remains the most famous queen who never lived.
EVERYTHING IS AS IT SHOULD BE IN CAMELOT: King Arthur is expanding his kingdom’s influence with Queen Guinevere at his side. Yet every night, dreams of darkness and unknowable power plague her.
Guinevere might have accepted her role, but she still cannot find a place for herself in all of it. The closer she gets to Brangien, pining for her lost love Isolde, Lancelot, fighting to prove her worth as Queen’s knight, and Arthur, everything to everyone and thus never quite enough for Guinevere–the more she realizes how empty she is. She has no sense of who she truly was before she was Guinevere. The more she tries to claim herself as queen, the more she wonders if Mordred was right: she doesn’t belong. She never will.
When a rescue goes awry and results in the death of something precious, a devastated Guinevere returns to Camelot to find the greatest threat yet has arrived. Not in the form of the Dark Queen or an invading army, but in the form of the real Guinevere’s younger sister. Is her deception at an end? And who is she really deceiving–Camelot, or herself? 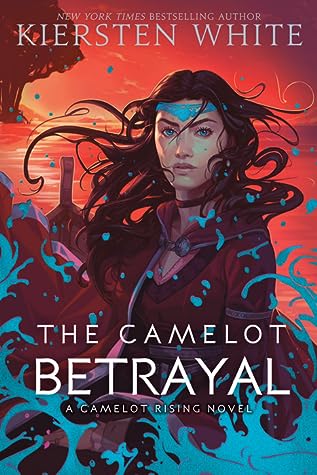 Review:
Big thanks to NetGalley and the publishers for providing me with an eARC in exchange for an honest review. The Camelot Betrayal is the second book in the Camelot Rising trilogy. I loved this book just as much as I loved the first (find my review here!) As I said in the review for the first book, this is a retelling of the myth of King Arthur and Camelot, but it is focused instead on Guinevere. I still know little to nothing about the original mythology, but this was fun for me. I think it was more fun for me because I didn’t know anything about the mythology. I didn’t have anything to compare it to other than the vague idea of the story that Arthur claimed Excalibur.
We follow Guinevere after the events of the first book. She’s trying to figure out who she is. She has little to no memories of her childhood and she’s confused. She’s supposed to be playing the part of Guinevere the Queen and finally feels like she might be figuring out how to do that. I really liked that Guinevere was trying to figure things out for herself. I think this made for a really interesting emotional journey. She has several important relationships, with her lady’s maid, her knight, and with Arthur. Relationships are always changing and growing, and that’s clear in this story. I liked this aspect of the story too. Guinevere’s still trying to figure out the right thing for her and for the people around her. She becomes more aware throughout the story that she might not be doing what’s best for her friends and she tries to change that. I liked Guinevere. She’s kind, but strong. She wants to do the right thing, and tries to, and feels guilt when there are consequences from her actions that she did not expect. I just really liked her.
I also really liked the development of her and Arthur’s relationship. It’s slow and sweet. They both want similar things, but Arthur feels guilt for how and why Guinevere came be to in Camelot. I liked seeing their relationship change from the first book. I don’t like the love triangle aspect. I’m team Arthur all the way, though the other choice is certainly intriguing.
Overall, I really enjoyed this book and the series so far. I’m very excited for the conclusion. I love all the character, main and supporting. I think my favorite part of the story though is the intrigue of the secrets that Guinevere thinks she is figuring out. I can’t tell what’s true and what isn’t. There’s so much that she doesn’t know and it really kept me wanting more. I loved how little pieces were tied together through the characters. I’m very eager to get all of the answers to the questions that I have from this book.