GoodReads Summary:
One way or another… she will be the end of the world.
With powers that weren’t supposed to be touched by mortal hands, Vi Solaris is determined to free herself and the world from the deadly vortex it’s trapped in. This mission has taken her to forbidden lands and has transformed her from a sheltered princess to a fearsome warrior.
But the ultimate triumph requires the ultimate sacrifice, forcing Vi to choose between the last tethers to her humanity and the very people she’s sworn to protect.
Vi’s story of magic, sacrifice, triumph, and love reaches its epic conclusion in Crystal Caged. 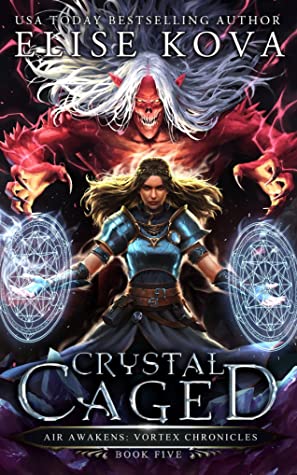 Review:
Crystal Caged is the finale to the Vortex Chronicles. It’s been a while since I read the previous books and I waited even longer to finally pick it up because I wasn’t ready for this world and these characters to be done. But thankfully, Kova seemed to know that. She provided a wonderful summary of each of the previous books at the beginning of this one.
So, all the years of Vi’s efforts are finally coming to an end. Once way or another this vortex will end. I liked Vi a lot, but I didn’t totally understand why she was so determined to make this the last time, whether she succeeded or not. Why would she condemn the world to a thousand years of darkness? I didn’t get that, so every time she mentioned that this was the final attempt it rubbed me the wrong way a little. Other than that, Vi’s choices were smart and usually thoughtful. I liked that she didn’t just tell her friends what to do, the three talked about it and then Vi did whatever she wanted (haha).
Overall, I think this was an incredible conclusion to a series that I love so dearly. I also am so excited for Kova’s next series, following different characters, but set in the same world. I think she did an incredible job weaving this story into the first series. I loved all of the things from the Air Awakens series that we got to see from a different perspective. Kova’s writing is excellent and she creates characters and relationships that you can’t help but love.