GoodReads Summary:
In this epic finale to the Empirium Trilogy from New York Timesbestselling author Claire Legrand, two queens, separated by a thousand years must face their ultimate destinies.
Queen Rielle, pushed away from everything she loves, turns to Corien and his promises of glory. Meanwhile, whispers from the empirium slowly drive her mad, urging her to open the Gate. Separated from Audric and Ludivine, she embraces the role of Blood Queen and her place by Corien’s side, determined to become the monster the world believes her to be.
In the future, Eliana arrives in the Empire’s capital as a broken shell of herself. Betrayed and abandoned, she fights to keep her power at bay—and away from Corien, who will stop at nothing to travel back in time to Rielle, even if that means destroying her daughter.
But when the mysterious Prophet reveals themselves at last, everything changes, giving Rielle and Eliana a second chance for salvation—or the destruction their world has been dreading. 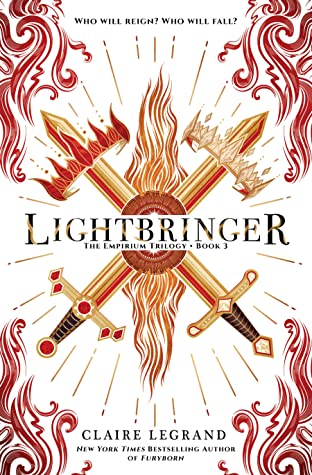 Review:
Lightbringer was everything I wanted as a finale for this series and more. It’s been a few weeks since I read it and I still don’t know that I can properly explain how much I loved this book. The story starts not too long after the ending of Kingsbane. This means that things are pretty exciting right from the start. We get to see Rielle start to sort of drown in her own power. I thought it was really interesting to see Rielle’s journey and figure out what was actually going on with her. From the start of the series we’re made to believe that we know exactly how Rielle’s story ends, so the anticipation of what happens up until that moment was so well done.
At the same time, we’re following Eliana’s point of view which was pretty much completely heartbreaking. Eliana was betrayed by someone she loved in the previous book and when Lightbringer starts, she’s being brought to Corien. Eliana’s story was honestly hard to read at times. Corien is trying to get what he wants from her and it’s not pleasant at all. Along with that, she sees the face of her betrayer most days. I loved Eliana so much in this book, even more than I did in the previous ones, because she didn’t falter. Even when she was past her breaking point, she would not give Corien what he wanted.
I guess I’m going to keep this short because I just honestly don’t know how to explain how lost in this world I got. I was so quickly invested in Rielle and Eliana’s characters. So, to reach the finale that was filled with so much development (for Rielle) and so much action (for both) it was such a joy even if the characters I love didn’t have an easy time at all. Legrand’s ability to bring this world, these characters, to life and so completely suck me into the story is incredible. I also have to say that I’m so pleased that I was pretty satisfied with the ending. I was really nervous that I would be devastated and everyone I loved would die (but like I was very lightly devastated for the whole book) but the ending truly picked up the pieces that were previously shattered. There’s more that I want to say, but I don’t want to spoil anything as this is the third and final book in the series. So, quick final thoughts: I loved this book. I love this world and the characters in it. I highly recommend this series to all fantasy lovers.