GoodReads Summary:
For seventeen-year-old Fable, the daughter of the most powerful trader in the Narrows, the sea is the only home she has ever known. It’s been four years since the night she watched her mother drown during an unforgiving storm. The next day her father abandoned her on a legendary island filled with thieves and little food. To survive she must keep to herself, learn to trust no one, and rely on the unique skills her mother taught her. The only thing that keeps her going is the goal of getting off the island, finding her father, and demanding her rightful place beside him and his crew. To do so Fable enlists the help of a young trader named West to get her off the island and across the Narrows to her father.
But her father’s rivalries and the dangers of his trading enterprise have only multiplied since she last saw him, and Fable soon finds that West isn’t who he seems. Together, they will have to survive more than the treacherous storms that haunt the Narrows if they’re going to stay alive.
Welcome to a world made dangerous by the sea and by those who wish to profit from it. Where a young girl must find her place and her family while trying to survive in a world built for men. Fable takes you on a spectacular journey filled with romance, intrigue, and adventure. 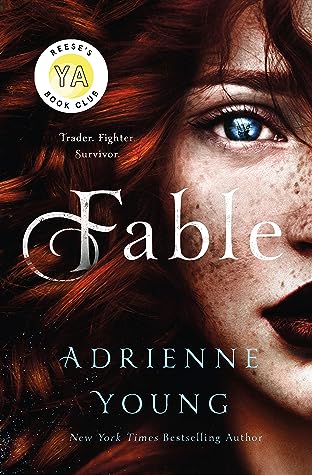 Review:
I received Fable from NetGalley and the publishers and I’m so glad because I loved it. I don’t know that I’ll explain exactly how much I loved it or why. But I’m going to do my best.
Fable lives on an island that is a very dangerous place. She’s working on saving enough money to travel and face her father. The father that left her on said island four years ago. He left her to fend for herself and told her she wasn’t meant for his world. She is ready to prove him wrong. Once she’s finally saved enough money, she begs passage from West, the man she trades gems she finds while diving. As this is a novel, things don’t exactly as planned when Fable finally comes face to face with her father again. I’m going to stop there with the plot details. I loved Fable. She kicked and screamed and clawed her way off the island. She said and did whatever it took to come back to face her father. And when he didn’t respond in the way she wanted she made a new plan. She finds herself a new family in West and his crew. I absolutely adored the whole crew of the Magnolia. I loved their secrets, their hopes and dreams. I am beyond excited to see what the crew will do in the next book. We got to see them work together as a unit, a family, and I loved it. I loved getting to know West and Willa, Paj and Auster. I loved that there were queer characters.
The writing and the world building were stunning. The writing was lyrical and descriptive. The world building was so well done. I could see this world in vivid colors. At times, I felt as if I was somehow in the story alongside Fable. I will absolutely be picking up more books by Young. I was enthralled by this story, by the writing, by Fable’s fire. I couldn’t put it down until the final page. I cannot recommend this book enough for lovers of YA fantasy, or other sorts of ‘pirate’ stories.

9 thoughts on “Fable by Adrienne Young”