GoodReads Summary:
In The Power the world is a recognisable place: there’s a rich Nigerian kid who lounges around the family pool; a foster girl whose religious parents hide their true nature; a local American politician; a tough London girl from a tricky family. But something vital has changed, causing their lives to converge with devastating effect. Teenage girls now have immense physical power – they can cause agonising pain and even death. And, with this small twist of nature, the world changes utterly.
This extraordinary novel by Naomi Alderman, a Sunday Times Young Writer of the Year and Granta Best of British writer, is not only a gripping story of how the world would change if power was in the hands of women but also exposes, with breath-taking daring, our contemporary world. 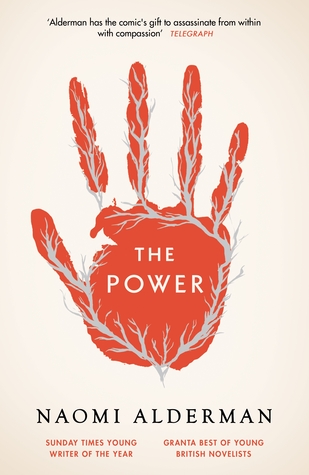 Review:
I don’t know what I was expecting from this book, but the story I got what so far beyond that. To keep it short, this book is basically about women who gain electrical abilities. Some parts of the world, the women take over completely, other parts of the world, women gain power by hiding their power. I think this story was incredibly told from several different perspectives in different parts of the world. I think that is what made this book so great.
We follow Margot who is the Mayor when it’s discovered that girls have electrical abilities, her daughter being one of them. When Margot’s daughter wakes the power in Margot, she realizes that she needs to change the way things are being seen in the world. Everyone’s searching for a cure, but Margot wants to teach and train the girls instead of letting them be seen as potential enemies or threats. I thought Margot’s perspective was interesting and I was rooting for her.
Allie/Eve was also a super interesting character. She runs away from her foster family and finds herself at a convent. She hears a voice in her head and it was never totally clear to me whether this was a mental health thing or if there was actually someone talking in her head. I think her ability to influence the other girls at the convent and the way she used YouTube and the population to gain followers was fascinating.
Roxy was the daughter of a high level drug dealer. She was so fierce and powerful. I loved that she was still loyal to her family despite most of the world deciding that men were useless now. I liked that she had goals and aspirations. I liked that she was loyal to her friends, too.
Finally, Tunde was a Nigerian man who caught a picture of women using their power when it first started to appear. He was offered money in exchange for it, which motivated him to travel and continue getting photos and stories that no one else was getting. I think his story was the most fascinating because he was a man in a now female dominated world, so there were times he was really frightened and others he was genuinely afraid for his life. I think because he traveled so widely it gave the reader a chance to see so many different places and how things were going.
Overall, this was a fascinating story to see the world as we know it flipped to women having the power. I think it was also a really interesting choice to frame this story as if it was a historical story being written by a man in a far off future where women are still in charge. I was confused a bit at first as there was no mention of this, but I think it added such an interesting aspect to the story.

3 thoughts on “The Power by Naomi Alderman”