GoodReads Summary:
Clover Martinez and The Last Teenagers on Earth are busy exploring the galaxy after leaving earth behind…even if they can’t help but be a little homesick.
So when their ship receives a distress signal from their former planet, they hope against hope that it means other survivors. But as soon as they arrive, they realize something’s deeply wrong: strange crystal formations have popped up everywhere and there’s some sort of barrier keeping them from leaving.
Seeking the origin of the formations and the reason for the barrier, the group discovers a colony of survivors hidden in the mountains. But the survivors aren’t who they seem… 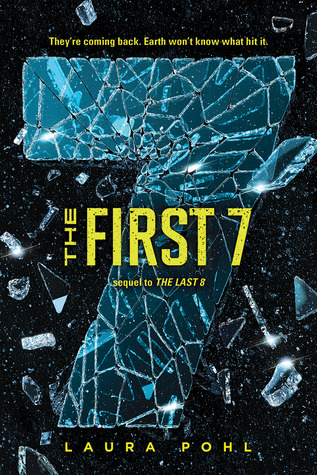 Review:
I enjoyed The Last 8 so much that I immediately had to start the audiobook for book two, The First 7. I loved The First 7 so much that I listened to the entire audiobook in one afternoon.
I loved this book for the characters. I enjoyed the plot and the whole storyline, but I was so invested in the characters and oh boy, was there drama with this found family. I’ll mention the storyline first and then I can get into what I actually want to talk about today. I was interested in the storyline. At the end of book one, our characters travel into space. At the start of this book, we get to see the characters in space after exploring for several months. There is an altercation toward one of the Last Teenagers and they leave the planet they’re on. When they return to their ship, they receive a distress signal. A distress signal that was coming from Earth. They argue about whether or not to return and see what or who sent this signal.
After returning to Earth, they realize that they weren’t the last humans on Earth. Other people survived. They arrive near the community called Unity. But they soon have more problems to solve than they bargained for. Something happens to one of their friends that they need to figure out and there is this barrier preventing them from going back into space. I will say that I completely saw through one of the smaller twists, but I was stumped about most of what was actually going on. The mystery and suspense of waiting for this found family to find all the answers was really well done.
Now, the characters. Sadly, this friend group has some issues during this book. They’re at odds because some of them aren’t acting like they’re worried about the problems anymore and they just want to stay and live in normal lives in Unity. But the problems that are in this book are ones that really need to be solved. So, the half of the group that’s working on it is mad at the other half for not making any effort. There’s all sorts of issues and hurtful things are said. It was really hard to see this found family that I loved be so at odds with one another. But I was really happy with the resolution and how they all worked the issues out. There were moments of putting their fights aside for bigger issues, but they also talked about what their fights were really about and I liked that a lot.
Overall, I really enjoyed this book. I think the narrator did a really great job with both of these books. I will definitely listen to more books that have this narrator. I really enjoyed getting to see these characters return to Earth and I thought the plot was interesting. I will absolutely be reading more books by Pohl in the future. This was a diverse story that followed characters that weren’t always easy to love, but had wonderful growth and development.

2 thoughts on “The First 7 by Laura Pohl”