GoodReads Summary:
Almost everyone in the small town of Splendor, Ohio, was affected when the local steel mill exploded. If you weren’t a casualty of the accident yourself, chances are a loved one was. That’s the case for seventeen-year-old Franny, who, five years after the explosion, still has to stand by and do nothing as her brother lies in a coma.
In the wake of the tragedy, Franny found solace in a group of friends whose experiences mirrored her own. The group calls themselves The Ordinary, and they spend their free time investigating local ghost stories and legends, filming their exploits for their small following of YouTube fans. It’s silly, it’s fun, and it keeps them from dwelling on the sadness that surrounds them.
Until one evening, when the strange and dangerous thing they film isn’t fiction–it’s a bright light, something massive hurdling toward them from the sky. And when it crashes and the teens go to investigate…everything changes. 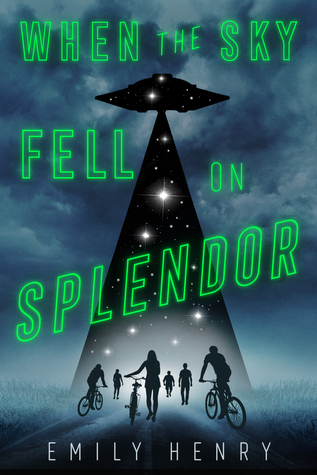 Review:
I am officially a huge fan of Emily Henry’s books. I’ve read three of her books now, and one that she co-wrote with Brittany Cavallaro. When the Sky Fell on Splendor is a story that may or may not be about aliens, but it also might be about ghosts and I still really don’t even know. So, if you’ve read this, please let me know. We follow The Ordinary while they investigate small town things like ghost stories and legends. I loved this premise. The Ordinary’s are a weird found family. They’re 100% dysfunctional and not always in a good way. I think that’s what I liked most about them though. Franny and her brother have a complicated relationship. Their older brother is in a coma and their mother walked out on them. Their dad isn’t really a dad, just an adult that lives with them. So, they’ve been through some hard things. But the love they have for one another is so obvious. The rest of the gang has also each been through their own hardships. I’m not going to get into the details of each of them, but this is a found family for a reason. They’ve all had their share of grief, and that’s what keeps them together but not in a way where they talk about their past. They are a family that avoids, which was so relatable.
What I loved about this story was that I really had no idea what was going on most of the time. Something crashes nearby while The Ordinary’s are working on their next ghost story documentary for their YouTube channel. Obviously, they go to investigate. They encounter something weird and electrical and wake up with several missing hours. Things sort of just get weirder from here. There are some ghost story mysteries, but also maybe some alien intervention. There’s also a murderous neighbor that gave the story a thriller vibe. It really just kept me guessing and once I got to end and everything was revealed it was sad and wonderful.
Overall, I’m very excited to read the one last book by Emily Henry that I haven’t gotten to. I loved the characters. I loved how bizarre this story was. I loved the dysfunctional and hurting found family. There was such a heartwarming talk about grief and what it means to lose people, whether they die or just leave. I loved this book.

“How many billions of things had to happen just right to give me this ordinary life.”

“There were still pieces of us we so badly wished each other could see and yet couldn’t make ourselves ask for, and there was anger and resentment and it still all hurt, but right now, we were here, and if we stayed long enough, things might start to heal, even a little bit.”

2 thoughts on “Blogtober Book Review: When the Sky Fell on Splendor by Emily Henry”