GoodReads Summary:
On a day that begins like any other, Hal receives a mysterious letter bequeathing her a substantial inheritance. She realizes very quickly that the letter was sent to the wrong person—but also that the cold-reading skills she’s honed as a tarot card reader might help her claim the money.
Soon, Hal finds herself at the funeral of the deceased…where it dawns on her that there is something very, very wrong about this strange situation and the inheritance at the centre of it. 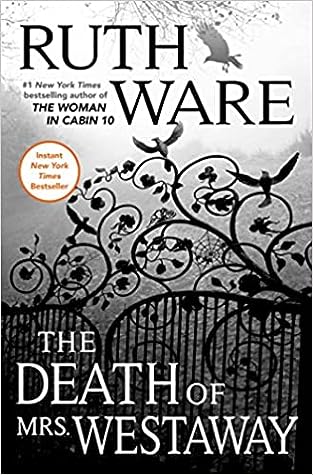 Review:
The Death of Mrs. Westaway is one of the last couple of mystery/thrillers that was on my TBR. I’ve been on a thriller kick this October so that I can clear out the books that have been sitting on my shelves for entirely too long (and so that I can start collecting new ones for 2021 spooky season). Ware’s books have been hit or miss for me, so I wasn’t sure whether I would enjoy this or not despite being pretty interested in the synopsis.
I will start by saying that I totally guessed a part of this story pretty early on. I developed lots of theories and dismissed them just as often. This story was a really great one to guess what the truth really was. I liked Hal. I could understand the choices she made and why she made them. I probably would have done the same thing in her position. But I did find myself wanting her to just tell her new family members the truth. She did eventually tell the truth, which is when things got a little wild.
Overall, this story wasn’t super fast paced, but the suspense made it enjoyable. The desire to get answers to the questions that I had pushed me through the slower parts of the story. I think the ending was completely unexpected and a big part of the reason why I enjoyed this story so much. I never could have guessed the truth behind what was really going on. I thought this was a pretty good mystery and I would definitely recommend it for an October read.
Keep on reading lovelies, Amanda.

One thought on “Blogtober Book Review: The Death of Mrs. Westaway by Ruth Ware”