GoodReads Summary:
Kell is one of the last Antari―magicians with a rare, coveted ability to travel between parallel Londons; Red, Grey, White, and, once upon a time, Black.
Kell was raised in Arnes―Red London―and officially serves the Maresh Empire as an ambassador, traveling between the frequent bloody regime changes in White London and the court of George III in the dullest of Londons, the one without any magic left to see.
Unofficially, Kell is a smuggler, servicing people willing to pay for even the smallest glimpses of a world they’ll never see. It’s a defiant hobby with dangerous consequences, which Kell is now seeing firsthand.
After an exchange goes awry, Kell escapes to Grey London and runs into Delilah Bard, a cut-purse with lofty aspirations. She first robs him, then saves him from a deadly enemy, and finally forces Kell to spirit her to another world for a proper adventure.
Now perilous magic is afoot, and treachery lurks at every turn. To save all of the worlds, they’ll first need to stay alive. 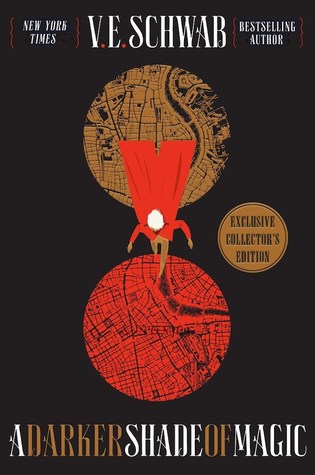 Review:
I’m going to start this review with a little back story. I recently rearranged my bookshelves (like three times before I got them to where I wanted them). I separated the books that I’ve read and the ones that I still haven’t read. Then I went further and organized them by age range (middle-grade, young adult, and adult). This made it very clear that my unread books were very unbalanced in the sense of age ranges. I have way more adult books that I haven’t read than either of the others. So, in my journey to work on getting my physical TBR down, I’ve decided to try to focus on my adult books so that I can get my TBR a little more balanced again. I feel like I’m making small goals to work toward the bigger goal. So, A Darker Shade of Magic was the first book I’ve picked up to work toward this. I’ve had A Darker Shade of Magic on my shelf for an embarrassingly long time. I’ve tried to pick it up so many times, and I even almost DNF’d it this most recent time.
Okay, now for the review. I was going to start off by saying that the world-building was my favorite part of the story, but the more I thought about it the more I realized that the characters were just as much a favorite part of this story. The concept of there being four different London’s was so interesting. Though I still have questions. Is there magic in the whole world of Londons that have magic? Is London the only commonality of these four worlds? Will we get to see more of any of the worlds in the next books? The parts of the world that we see was so interesting, but I’m still a bit disappointed that we didn’t get to see Black London. The world was so intricate and complex, the way the four London’s connect but also are so different from one another. I’m very excited to continue the series and see more of these London’s.
The characters were amazing. I wasn’t really sold on this book until I met Lila. I love Lila with my whole heart. She’s a thief, that mostly dresses as a man. I loved how fiery and strong-willed she is. I loved her dream of being a pirate. I loved her ‘take no shit’ attitude. She doesn’t let anyone tell her what she can and cannot do. It wasn’t until I met Lila that I really started to like Kell. I thought he was interesting, sure, but until he and Lila started interacting, I didn’t really care. Once he and Lila have a plan and start working toward their goal, I cared a lot. These two were really the best. Their personalities are so different but they complement each other in the best ways.
Overall, I really enjoyed this book and I’m very excited to pick up book two. I think the book was filled with an incredible world and characters that will make you love them, even if you don’t want to at first.

“I’d rather die on an adventure than live standing still.”

“Hesitation is the death of advantage.”

“He would see her again. He knew he would. Magic bent the world. Pulled it into shape. There were fixed points. Most of the time they were places. But sometimes, rarely, they were people. For someone who never stood still, Lila felt like a pin in Kell’s world. One he was sure to snag on.”

One thought on “Blogtober Book Review: A Darker Shade of Magic by V.E. Schwab”