GoodReads Summary:
In this daring and romantic fantasy debut perfect for fans of The Handmaid’s Tale and Latinx authors Zoraida Córdova and Anna-Marie McLemore, society wife-in-training Dani has a great awakening after being recruited by rebel spies and falling for her biggest rival.
At the Medio School for Girls, distinguished young women are trained for one of two roles in their polarized society. Depending on her specialization, a graduate will one day run a husband’s household or raise his children. Both paths promise a life of comfort and luxury, far from the frequent political uprisings of the lower class.
Daniela Vargas is the school’s top student, but her pedigree is a lie. She must keep the truth hidden or be sent back to the fringes of society.
And school couldn’t prepare her for the difficult choices she must make after graduation, especially when she is asked to spy for a resistance group desperately fighting to bring equality to Medio.
Will Dani cling to the privilege her parents fought to win for her, or will she give up everything she’s strived for in pursuit of a free Medio—and a chance at a forbidden love? 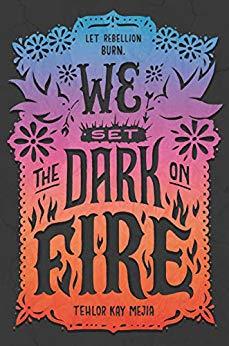 Review:
We Set the Dark on Fire totally blew me away. I bought this book as a kindle daily deal a few months ago and I’m so glad that I did. It was basically what the synopsis said the story is, but it was still so good.
The story was a bit predictable, but honestly, that made it better. The anticipation of the things I predicted happening was the best part of this story. Dani is picked to be the Primera of an up and coming politician. His family is one of the most powerful in the country. Dani was struggling with many emotions. She was trained that Primera’s don’t show those emotions. They are strong, logical, and strategic. They are equals with their husbands, there to support their careers and households. Dani was trying to pretend to be the perfect Primera when in reality she was anything but that.
Which brings us to Carmen, Dani’s rival at school. Carmen is chosen as Segunda. This was a challenge for Dani because Carmen was never very nice to Dani and now the two live together and are married to the same man, and essentially each other. They grow closer while they live together. I really loved these two getting to know one another better outside of their school rivalry.
Overall, this book was excellent. There was a female/female romance that I am totally obsessed with. They also attempt to overthrow the government. Dani is more or less forced to join the resistance and I love stories like that. Women fighting against a corrupt system is something I always want to read about.