GoodReads Summary:
Best-selling author Rick Riordan presents the sequel to the critically acclaimed Sal and Gabi Break the Universe, a brilliant sci-fi romp with Cuban influence. Among many other challenges, Sal and Gabi have to try to make everything right with our world when there is a rogue Gabi from another universe running loose.
Sal Vidon doesn’t want to live a Mami-free life. Pulling different versions of his mother from other universes is how he copes with missing his own, who died years ago. But Sal’s father, a calamity physicist, is trying to shut down all the wormholes Sal creates, because Papi thinks they are eroding the very fabric of our world. All of Papi’s efforts are in vain, however, because a Gabi from another universe has gone rogue and is popping up all over the place, seeking revenge for the fact that her world has been destroyed. While Sal and Gabi work together to keep both Papi and Rogue Gabi under control, they also have to solve the mystery of Yasmany, who has gone missing from school. Could it have something to do with the wormhole in the back of his locker?
Readers who enjoyed Sal and Gabi Break the Universe will relish being back in the world of Culeco Academy and the Coral Castle along with such unforgettable characters as American Stepmom, the Gabi-Dads, Principal Torres, and the sassy entropy sweeper. With multiple Sals and Gabis in charge, it’s no wonder this sequel offers even more hilarious weirdness and love than the first book. 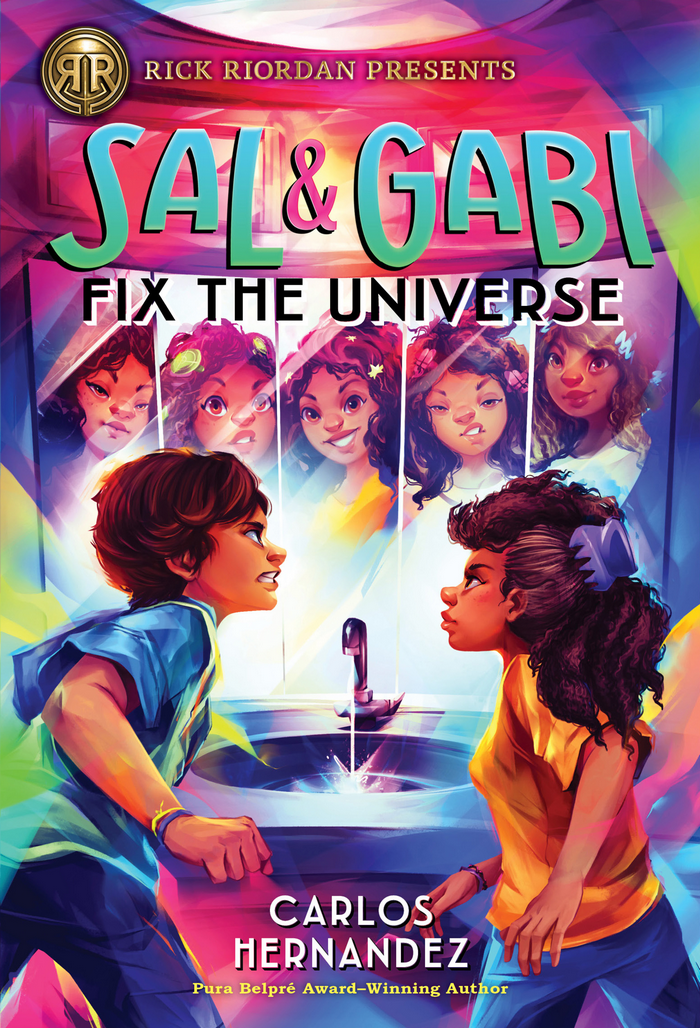 Review:
I absolutely adored Sal and Gabi Break the Universe (read my review here), so I was beyond excited for this sequel. It took me longer than I’d like to admit to finally pick it up, but it was everything I expected.
So, in the last book, Sal and Gabi finally let their parents in on what they’ve been doing with the holes that Sal can make in the universe. That’s one aspect I really liked about this book (and series) the parents were actually involved in what was going on, for the most part. In this sequel, Sal is definitely hiding some things from his Papi, but he did it for what he thought were the right reasons. I really also loved the school that Sal and Gabi go to. There’s such a sense of community and it’s just such a wonderful place. I can only hope to find a school like that for my child in the future.
The thing I liked best about this story was the characters. Sal is a boy that has diabetes. He doesn’t let it hinder his life, but it’s very present in the story. I really liked this aspect of the story. On top of Sal’s diabetes, he’s Cuban (as are many of the other characters in the story.) I loved that the main cast of characters was diverse and interesting.
Gabi, Sal’s best friend, is equally one of the best parts of this book. She’s such a take-charge girl and I love her so much. She has such a huge heart and does anything she can for the people in her life. I love her caring personality and I love her family. She has such an interesting and wonderful family dynamic that I loved seeing in this book. She has many dads and I love how different and loving her family is.
Overall, this book was amazing. The story was interesting and kept me wanting to read non-stop, but also want to read it slowly so that it wouldn’t be over. This story is so full of love, supportive friendships, adventure, and a whole bunch of science I could never understand. This series is one I will scream about forever.