GoodReads Summary:
It’s been six weeks since Magnus and his friends returned from defeating Fenris Wolf and the fire giants. Magnus has adjusted to life at the Hotel Valhalla—as much as a once-homeless and previously alive kid can. As a son of Frey, the god of summer, fertility, and health, Magnus doesn’t exactly fit in with the rest of Odin’s chosen warriors, but he has a few good peeps among his hallmates on floor nineteen, and he’s been dutifully training for Ragnarok along with everyone else. His days have settled into a new kind of normal.
But Magnus should have known there’s no such thing as normal in the Nine Worlds. His friends Hearthstone and Blitzen have disappeared. A new hallmate is creating chaos. According to a very nervous goat, a certain object belonging to Thor is still missing, and the thunder god’s enemies will stop at nothing to gain control of it.
Time to summon Jack, the Sword of Summer, and take action. Too bad the only action Jack seems to be interested in is dates with other magical weapons… 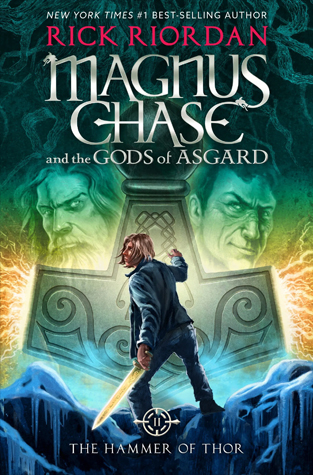 Review:
I have loved every single one of Riordan’s books I’ve read so far. I don’t know what it is about this series but I just don’t love it as much as his others. There are many things I do like. For example, Magnus was a homeless kid in Boston before he died and I think it’s so great that this is a thing that exists because homelessness is a topic generally avoided and Riordan didn’t do that. This series is also filled with a diverse cast of characters. The newest edition, Alex, is gender fluid. I can’t speak to the quality of the representation but I thought it was really interesting to read Magnus’s questions and Alex’s answers. I also love Samira. I love that even though she’s sucked into the world of Norse mythology, she still holds strong to her faith and beliefs. I thought this was a great part of the story.
My biggest issue with this book was that literally, everything was such high stakes. I guess I understand because it’s the second book in a series, but it was too much sometimes. Every step toward their goal was ‘complete this task or DIE’ and it just seemed a little unnecessary.
Overall, I enjoyed the story. The characters were 100% the best part. I loved the diverse cast and getting to see them learning more about one another. I plan to finish the series for sure to see how everything ends up. Also, the way this story ended had me screaming. I cannot wait for the two different groups to meet up.