GoodReads Summary:
Ryann Bird dreams of traveling across the stars. But a career in space isn’t an option for a girl who lives in a trailer park on the “wrong” side of town. So Ryann becomes her circumstances and settles for acting out and skipping school to hang out with her delinquent friends.
One day she meets Alexandria: a furious loner who spurns Ryann’s offer of friendship. After a horrific accident leaves Alexandria with a broken arm, the girls are brought together despite themselves—and Ryann learns her secret: Alexandria’s mother is an astronaut who volunteered for a one-way trip to the edge of the solar system.
Every night without fail, Alexandria waits to catch radio signals from her mother. And now it’s up to Ryann to lift her onto the roof day after day until the silence between them grows into friendship, and eventually something more.
The Weight of the Stars is the new LGBT young adult romance from K. Ancrum, written with the same style of short, micro-fiction chapters and immediacy that garnered acclaim for her debut, The Wicker King. 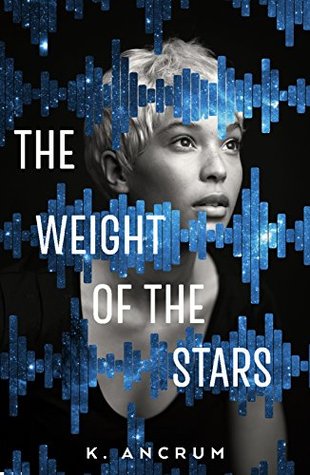 Review:
The Weight of the Stars was such a wonderful story. I really adored the characters the most. We follow Ryann Bird as she tries to collect another friend into her circle of “delinquent friends.” Alexandria is the new girl at school, but more so she’s the daughter of an astronaut that caused quite a stir when she set off into space. Ryann and Alexandria grudgingly become friends because Ryann doesn’t give Alexandria much choice otherwise. They spend their nights on Alexandria’s roof trying to catch radio signals from her mom.
I loved this story. It was full of love and immediate acceptance. Ryann and her friends were just a great group. They’re all a little weird in the best ways. They’re also a really diverse group ranging from Ryann, who is Black and also the legal guardian to her brother James and James’s baby, to Ahmed who had two dads and a
mom that are all currently together. I really enjoyed these friends. They were funny and caring and all a bit odd.
The only thing I didn’t like was the chapter titles, but that’s only because I didn’t understand them. They seemed like they were supposed to specify something but I wasn’t quite sure if it was supposed to be how much time had passed since the end of the last chapter or not.
Overall, I really enjoyed this story. The characters were absolutely the best part. Their antics were hilarious, occasionally illegal, and they just loved one another so purely.

“We’re all made of the same stuff. Even if you arrange it in different ways or make puzzles of it.”

“Diversity is a flower that blooms with greater beauty and greater strength each time it is cross-pollinated.”

One thought on “The Weight of the Stars by K. Ancrum”