GoodReads Summary:
Until their mother vanished, the Greystone kids—Chess, Emma, and Finn—knew nothing about the other world.
Everything is different there. It’s a mirror image, except things are wrong. Evil. Their mother tried to fix it, but she and an ally got trapped there along with Ms. Morales, their friend Natalie’s mom.
Now the four kids—brave Chess, smart Emma, kind Finn, and savvy Natalie—are determined to rescue everyone.
To do so, they have to go back: into the other world, where even telling the truth can be illegal.
But in such a terrifying place, Chess doubts he can ever be brave enough. Despite all her brains, Emma can’t seem to break the code. With everything spiraling out of control, Finn has to pretend he’s okay.
And for Natalie, the lies of the other world include some she wishes were actually true. What if she’s gotten so used to lying she no longer knows what to believe?
The second book in the Greystone Secrets series, The Deceivers, by bestselling author Margaret Peterson Haddix, continues the twisty and suspenseful story of the Greystone kids and examines the power of the truth—or a lie—to alter lives, society, and even an entire reality 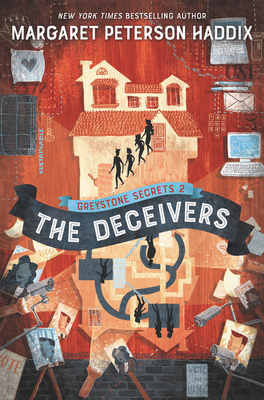 Review:
While I really enjoyed this book, I definitely liked the first book better. (Read my short review of the first book here.) I think this book suffered from telling instead of showing, though this got better toward the end.
We’re following Chess, Emma, Finn, and Natalie as their living with Natalie’s dad and trying to figure out how to save their mothers. After everything went wrong at the end of the last book, they’ve lost their way into the other reality and need to figure out how to get back so they can rescue their mothers. I thought the kids being able to figure out their mother’s message and another way to get to them was interesting. But once they get into the other world, they spend much of their time watching and trying to decipher the rest of the letter from their mother. While Emma is decoding the letter, the others watch cameras trying to figure out what was going on around them. Chess, Emma, and Finn spend most of this book hiding inside secret passages while Natalie impersonated her doppelganger. So, while Natalie’s chapters were exciting and full of new things, the other three were left to watch and stew in their inner thoughts.
Overall, this was still a really fun story and I enjoyed it. I’m definitely excited to see what’s going to happen next in this series. I think this is a great middle-grade series and I wish I saw more in the book community talking about it.

2 thoughts on “The Deceivers by Margaret Peterson Haddix”