GoodReads Summary:
Rebellions are built on hope.
Set in a horrifying near-future United States, seventeen-year-old Layla Amin and her parents are forced into an internment camp for Muslim American citizens.
With the help of newly made friends also trapped within the internment camp, her boyfriend on the outside, and an unexpected alliance, Layla begins a journey to fight for freedom, leading a revolution against the camp’s Director and his guards.
Heart-racing and emotional, Internment challenges readers to fight complicit silence that exists in our society today. 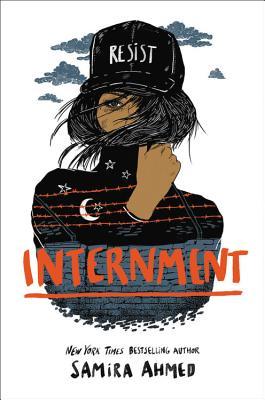 Review:
What a horrifying potential future this story was. I cried for most of the beginning of this book. I chose to read this via audiobook and I just have to mention that it was incredibly well produced. Though there’s only one narrator, there were all sorts of interesting effects included. I don’t want to say that I enjoyed this story because it was terribly hard to listen to and it was a very hard topic, but it was a fascinating story.
We follow Layla as her family is removed from their home and forced into an internment camp. This was the hardest part of the story. Samira Ahmed did an incredible job of filling Layla’s experience and internal thoughts with emotions. I couldn’t help but cry at the things that Layla was made to see and experience. The hardest thing for me about this story was how easily this “five minutes in the future” could come to pass. As someone who was born and raised as a white girl in America, I kept saying to myself, “this could never happen because of xyz.” Then, minutes later, Layla would say the same thing to her parents. I think that was the worst part for me. Layla was born in America, she was a citizen, and yet all of these horrible things were happening to her because her family wouldn’t hide their religion.
I really loved Layla’s spirit. She refused to be beaten down while in the internment camp. Surrounded by horrible things, seeing people speak out getting taken away or literally beaten didn’t stop her from plotting a rebellion. I really liked this aspect of the story. Hope in the face of something so hopeless was the highlight. Along with this, I really liked that this wasn’t an “I hate America” story. There were guards that were on the side of those imprisoned. There were protests all over the country. The people that weren’t hateful and horribly racist stood up for the Muslims that were being taken from their homes. I liked that all of the people came together to change what was happening.
Overall, this was a hard story to read, but an important one. It’s a story sure to make you cry, but by the end of it you will see that hope and resisting those with hateful beliefs will not win.

“What’s that thing people always say about history? Unless we know our history, we’re doomed to repeat it? Never forget? Isn’t that the lesson? But we always forget. Forgetting is in the American grain.”

“It’s not about danger. It’s about fear. People are willing to trade their freedom, even for a false sense of protection”
“Then I glance beyond the fence at the sea of people. In this place where I thought I was lost, the world has found me. Hope courses through my veins.”

3 thoughts on “Internment by Samira Ahmed”