GoodReads Summary:
Frey and Rafi are inseparable . . . two edges of the same knife. But Frey’s very existence is a secret.
Frey is Rafi’s twin sister-and her body double. Their powerful father has many enemies, and the world has grown dangerous as the old order falls apart. So while Rafi was raised to be the perfect daughter, Frey has been taught to kill. Her only purpose is to protect her sister, to sacrifice herself for Rafi if she must.
When her father sends Frey in Rafi’s place as collateral in a precarious deal, she becomes the perfect impostor-as poised and charming as her sister. But Col, the son of a rival leader, is getting close enough to spot the killer inside her. As the deal starts to crumble, Frey must decide if she can trust him with the truth . . . and if she can risk becoming her own person.
With Impostors, master storyteller Scott Westerfeld returns with a new series set in the world of his mega-bestselling Uglies. 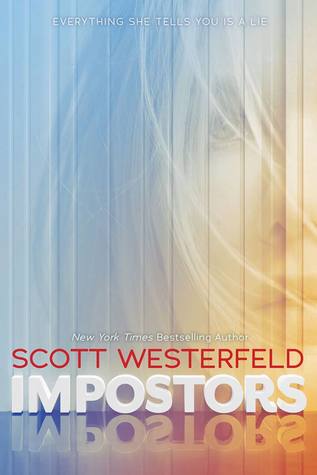 Review:
I have been waiting to read this book until I managed to reread the entire Uglies series and I’m so glad I did. Impostors takes place around fifteen years after the end of Specials. Like with Extras, I really enjoyed getting to see the aftermath of Tally’s actions and to see how the world was changed by her revolution. I also really enjoyed getting to see a different part of this world that I’ve loved for so many years. This was such a different book from Extras and I really enjoyed that.
We follow Fray as she’s sent to a neighboring city as a hostage. She’s the extra daughter. The body double for her twin sister, Rafia. The world doesn’t even know she exists. I thought she was such a complicated and interesting character. Her struggle of loving her sister but hating her father was so interesting. I loved her strength and how out of place she felt. It was fascinating to see her in a situation she wasn’t comfortable in (pretending to be Rafia full time) but then becoming herself again (after her father does some terrible things) and showing who she really is. I liked that it didn’t take very long for her to share her secret because I hate the secret keeping trope. I loved the sister relationship because I’m a sucker for siblings in books, but I have a bad feeling about Rafia for some reason.
Then there’s Col. I totally liked him from the start. I thought he was interesting despite his “boring” reputation. He loves his family and his people. He’s a natural leader and just a really good friend. I’m so excited and anxious about how this book ended with Fray and Col so I’ve borrowed book two from the library while I wait for the paperback edition to be published (to match the rest of the series).
Overall, like most of Westerfeld’s books, this was full of action and adventure. It was a fast-paced story and I couldn’t wait to find out what was going to happen next. I’ve quickly become so invested in these characters and their storylines. I cannot wait to continue the series.