GoodReads Summary:
Owen is the organizer of the Montgomery clan, running the family’s construction business with an iron fist – and an even less flexible spreadsheet. And though his brothers give him grief for his compulsive list-making, the Inn BoonsBoro is about to open right on schedule. The only thing Owen didn’t plan for was Avery MacTavish….
Avery’s popular pizza place is right across the street from the inn, giving her a first-hand look at its amazing renovation — and a newfound appreciation for Owen. Since he was her first boyfriend when they were kids, Owen has never been far from Avery’s thoughts. But the attraction she’s feeling for him now is far from innocent.
As Avery and Owen cautiously take their relationship to another level, the opening of the inn gives the whole town of BoonsBoro a reason to celebrate. But Owen’s hard work has only begun. Getting Avery to let down her guard is going to take longer than he expected — and so will getting her to realize that her first boyfriend is going to be her last. 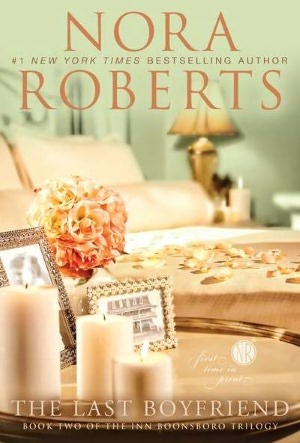 Review:
In the second book of the Inn Boonsboro trilogy, we follow Avery and Owen. They’re life long friends and we get my favorite trope of friends to lovers. Part of my feels like this had second book syndrome and another part of me really enjoyed it. It was a totally character-driven story with minimal plot. It felt like not much happened, but there was growth for all the characters, especially Owen and Avery. They grew together while figuring out how to be with one another as more.
I really liked Avery. She’s got mommy issues which I can’t relate to. But she also is stubborn and determined. She works hard at anything she sets her mind to and doesn’t take no for an answer. She’s thoughtful and kind, but doesn’t take anyone’s crap and stands up for what she thinks is right.
Owen felt like we didn’t really get to go deeper than the surface. We get that he’s a really neat and organized guy (maybe overly so). He loves his family, his mother, and his brothers. I love the family man aspect but I didn’t feel like we really got to know him. His fears and hopes and dreams.
Overall, I had fun reading this but it didn’t blow me away. I adore all of the scenes with the Inn and its ghost, Lizzy. I really love the small-town setting and the tight-knit community.