GoodReads Summary:
The last human in the universe is on the run from a godlike intelligence in this rip-roaring debut space opera.
Sarya is the civilized galaxy’s worst nightmare: a Human.
Most days, Sarya doesn’t feel like the most terrifying creature in the galaxy.
Most days, she’s got other things on her mind. Like hiding her identity among the hundreds of alien species roaming the corridors of Watertower Station. Or making sure her adoptive mother doesn’t casually eviscerate one of their neighbors. Again.
And most days, she can almost accept that she’ll never know the truth–that she’ll never know why humanity was deemed too dangerous to exist. Or whether she really is–impossibly–the lone survivor of a species destroyed a millennium ago.
That is, until an encounter with a bounty hunter and a miles-long kinetic projectile leaves her life and her perspective shattered.
Thrown into the universe at the helm of a stolen ship–with the dubious assistance of a rebellious spacesuit, an android death enthusiast on his sixtieth lifetime, and a ball of fluff with an IQ in the thousands–Sarya begins to uncover an impossible truth.
What if humanity’s death and her own existence are simply two moves in a demented cosmic game, one played out by vast alien intellects? Stranger still, what if these mad gods are offering Sarya a seat at their table–and a second chance for humanity?
The Last Human is a sneakily brilliant, gleefully oddball space-opera debut–a masterful play on perspective, intelligence, and free will, wrapped in a rollicking journey through a strange and crowded galaxy. 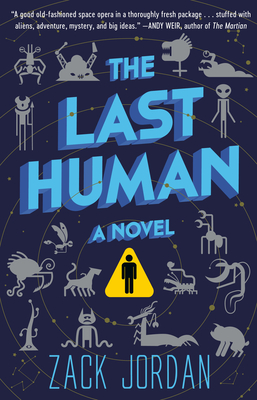 Review:
Shout out of thanks to NetGalley for providing this ARC in exchange for an honest review. This review is going to be short (hopefully) because I just didn’t like this book. There was a lot of potentials for me to like it because we follow what is supposedly the last human being in the universe. As she hides her identity, we meet the Widow that adopted her. And then many other alien species as she goes off on adventures. My biggest problem with this book was that it focused on the wrong things. Instead of telling the reader anything about what these species look like aside from small things that we sort of have to put together to get the whole picture (giant spiders? Cyborgs? Tiny spiders?) the story focuses on their culture and things other than the physical details. This was interesting but left me confused in the moment. Character interactions we hard because I couldn’t really picture the characters, even the human. Because she’s hiding with a Widow mother but was she disguised? Or was she just looking human the whole time and no one knew what they looked like?
I just spent most of this book confused. There was a lot going on and so much of it that was just over my head. I don’t want to go into detail about everything that confused me, but there was more than just the characters. Technical things too that were important to the story were a bit muddled. I also didn’t like the main character. She had moments where I liked her but she complained so much and did all the wrong things. I just wanted someone to kill her and be done with it.
Overall, this was a miss for me. I definitely think there are others out there who will enjoy this, but it’s not for me. I did see a few reviews that also mentioned the lack of character descriptions bothering them as well.

2 thoughts on “The Last Human by Zack Jordan”