GoodReads Summary:
Juliette hasn’t touched anyone in exactly 264 days.
The last time she did, it was an accident, but The Reestablishment locked her up for murder. No one knows why Juliette’s touch is fatal. As long as she doesn’t hurt anyone else, no one really cares. The world is too busy crumbling to pieces to pay attention to a 17-year-old girl. Diseases are destroying the population, food is hard to find, birds don’t fly anymore, and the clouds are the wrong color.
The Reestablishment said their way was the only way to fix things, so they threw Juliette in a cell. Now so many people are dead that the survivors are whispering war – and The Reestablishment has changed its mind. Maybe Juliette is more than a tortured soul stuffed into a poisonous body. Maybe she’s exactly what they need right now.
Juliette has to make a choice: Be a weapon. Or be a warrior. 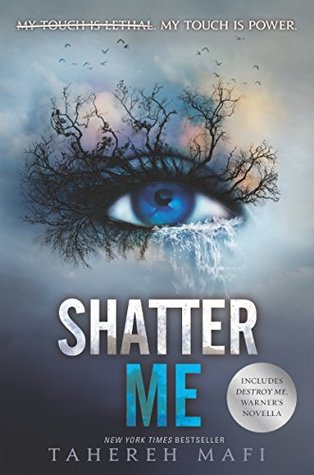 Review:
I read the Shatter Me series years ago when it first came out but thought it was time for a reread because I don’t remember a single thing about the series and there are more books in it now that I haven’t read.
Sadly, I didn’t really like this book. The writing was flowery and I kind of liked that. It was pretty in a world that was sort of terrible. Juliette was annoying. Her relationship with Adam wasn’t very believable. Also, the things that happen with them toward the end of the book was disappointing. She loves him so much but won’t fight for him? Not believable to me.
Warner was a subpar villain. He’s annoying bad. I just didn’t really love anything about this book. I’m told the next one is way better and I’m already about halfway through it. I may continue to book three, but I might not. I guess you all shall find out in my review of book two when I finish it.