GoodReads Summary:
S. A. Chakraborty continues the sweeping adventure begun in The City of Brass conjuring a world where djinn summon flames with the snap of a finger and waters run deep with old magic; where blood can be dangerous as any spell, and a clever con artist from Cairo will alter the fate of a kingdom.
Nahri’s life changed forever the moment she accidentally summoned Dara, a formidable, mysterious djinn, during one of her schemes. Whisked from her home in Cairo, she was thrust into the dazzling royal court of Daevabad—and quickly discovered she would need all her grifter instincts to survive there.
Now, with Daevabad entrenched in the dark aftermath of a devastating battle, Nahri must forge a new path for herself. But even as she embraces her heritage and the power it holds, she knows she’s been trapped in a gilded cage, watched by a king who rules from the throne that once belonged to her family—and one misstep will doom her tribe..
Meanwhile, Ali has been exiled for daring to defy his father. Hunted by assassins, adrift on the unforgiving copper sands of his ancestral land, he is forced to rely on the frightening abilities the marid—the unpredictable water spirits—have gifted him. But in doing so, he threatens to unearth a terrible secret his family has long kept buried.
And as a new century approaches and the djinn gather within Daevabad’s towering brass walls for celebrations, a threat brews unseen in the desolate north. It’s a force that would bring a storm of fire straight to the city’s gates . . . and one that seeks the aid of a warrior trapped between worlds, torn between a violent duty he can never escape and a peace he fears he will never deserve. 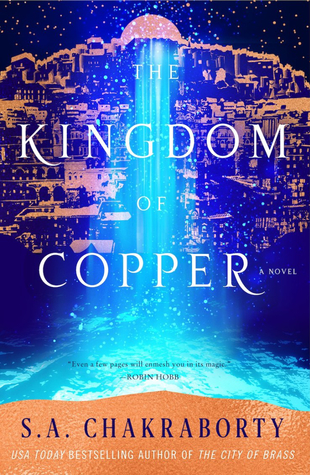 Review:
Friends, where do I start with this one? I am writing this review at six o’clock in the morning, running on about four hours of sleep because my child is boycotting sleep lately. So, please bear with me as we talk about this book together. I’m not really sure any of my thoughts will even make sense, but we’re going to try anyway.
This one was very different from the first book. Gone is the fierce girl who can find her way out of any situation and in her place is a defeated girl that is trying to learn her craft and not risk the lives of others. Nahri has tried to stand up for what she felt was right and others lost their lives for it. So, she fell in line. She did her job. She kept her head down. I didn’t love this version of Nahri, so I was happy when she found something to be passionate about again outside of her abilities. She discovers an old hospital and plans to return it to its former glory, to make it a place of healing for all of those that live in Daevabad. I loved this. I loved seeing Nahri stand up for something she wanted to do. I loved seeing that old fierceness come back to her.
While The City of Brass was a fairly political story, The Kingdom of Copper was almost entirely political. I didn’t mind this, but some parts were slow going trying to remember who was who and which people hated which and why. I still really enjoyed it. The dynamics were complex, interesting, and infuriating. I just wanted to shake all of the different characters and yell at them to get along. There was so much hatred and violence in this story because of different races and I just hated it, much like I do in everyday life. I just want everyone to get along. But at the same time, I couldn’t help but hate the King and the heir. I just really hated them. Though the heir sort of redeemed himself in the end.
Ali really grew into himself. He spent five years in a small village helping those that lived in it before he’s called back to Daevabad and dragged right back into the drama and politics of the city. He, like Nahri, has been beaten down and broken by the king, his father. I really didn’t like Ali at the end of the first book, but I loved him in this one. He’s trying, unsuccessfully, to keep his head down, but can’t help but get involved. Usually, at the expense of others. I liked him because he always had the best of intentions. He had a good heart, even if his plans usually went awry. I am dying to know how his part of this story will play out in the final book.
Now, I’m going to keep this part vague because spoilers, but you’ll know what I’m talking about if you’ve read this already. The mystery players that have their own part in this book were infuriating. I was so excited at first, but the more I read of their story and their plan, the more that excitement turned into disdain. I do not approve of the actions of these mystery players.
Overall, this was a different book from the first, but I didn’t find that to be a bad thing. The characters grew and learned and developed. They face challenges that broke them down but found their way back to fighting for their beliefs. I loved the ups and downs, the action and adventure, the drama. I am dying to finish the series.

9 thoughts on “The Kingdom of Copper by S.A. Chakraborty”