GoodReads Summary:
When Leo, an Italian championship swimmer, and Naomi, a science genius from California, are two of the twenty-four teens drafted into the International Space Training Camp, their lives are forever altered. After erratic climate change has made Earth a dangerous place to live, the fate of the population rests on the shoulders of the final six who will be scouting a new planet. Intense training, global scrutiny, and cutthroat opponents are only a few of the hurdles the contestants must endure in this competition.
For Leo, the prospect of traveling to Europa—Jupiter’s moon—to help resettle humankind is just the sense of purpose he’s been yearning for since losing his entire family in the flooding of Rome. Naomi, after learning of a similar space mission that mysteriously failed, suspects the ISTC isn’t being up front with them about what’s at risk.
As the race to the final six advances, the tests get more challenging—even deadly. With pressure mounting, Naomi finds an unexpected friend in Leo, and the two grow closer with each mind-boggling experience they encounter. But it’s only when the finalists become fewer and their destinies grow nearer that the two can fathom the full weight of everything at stake: the world, the stars, and their lives. 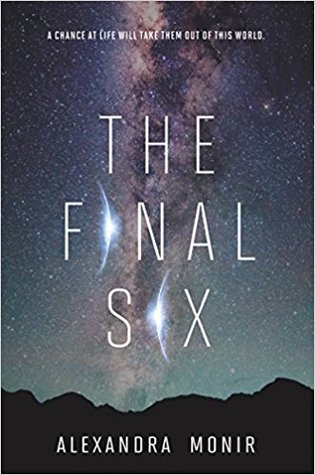 Review:
I picked this book up because Alexandra Monir is one of the author’s that I’d not heard of until the lineup of authors was released for the NoVaTeen Book Festival. I was really intrigued by the synopsis for this one, but part of me didn’t expect to love this as much as I did. I listened to the audiobook. And the one thing I will say about the audio is that it threw me that Leo was Italian, like born in Italy and lived there his entire life, but the narrator for him didn’t have an accent? It’s a small thing, and I quickly got over it. I liked both narrators, but also, they didn’t talk at the same speed, so listening on 1.5x speed Leo’s narration was perfect but Naomi was a little fast. Again, a small thing and I quickly got over it.
I really enjoyed this story. I liked that it was science-y, but not so much that there were constant explanations about the scientific things that were going on. It was explained well and not overly so. Too many science fiction novels are too filled with over explanations and big science words when it’s not needed. I loved this story’s version of ‘the end of the world’ via extreme natural disasters like earthquakes and tsunamis. I love dystopian and science fiction books that are mildly terrifying because of their potential to become our future. This was a great one. Twenty-four teens are selected from around the world to train and learn to maybe become a part of the final six that will be sent on a mission to terraform one of Jupiter’s moons that is habitable for humans.
Seeing the characters learn and train for this mission was interesting, but even more so was the contrast between Leo and Naomi. They’re two people that have connected when they otherwise wouldn’t have, all thanks to this program. Leo fiercely dedicated to doing his best and being a part of the final six, whereas Naomi is adamantly against the mission because she feels that those in charge of the space program are keeping secrets they shouldn’t be. I thought the fact that their relationship developed despite their very different views on the mission was really compelling, one always trying to sway the other.
Overall, I really enjoyed The Final Six and I am very excited to read the second book. The ending was killer in the sense of leaving the reader hanging. Many things were wrapped up but also left in a way so that the reader is excited about what is going to come next. I cannot wait for book two, and you lovely, have just enough time to read this book before its sequel comes out.

10 thoughts on “The Final Six by Alexandra Monir”