GoodReads Summary:
Samantha Willan is a workaholic lawyer. She’s grateful for some rest and relaxation in cottage country, and after a recent breakup she wants to stay as far away from romance as possible. Then she meets her irresistible new neighbor. There’s something strange and mysterious about his eyes. Is it just her imagination, or are they locked on her neck?
Garrett Mortimer is a rogue hunter. His last assignment united Lucian Argeneau with his lifemate, and Mortimer is hoping this one will be less…adventurous. He’s here to track down a reported rogue, but fun in the sun is every bloodsucker’s nightmare. Worse, he can’t seem to get his mind off Samantha, especially when he spies her skinny-dipping in the lake. After eight hundred years as a bachelor, is he ready to turn a volatile attraction into a lasting love affair? 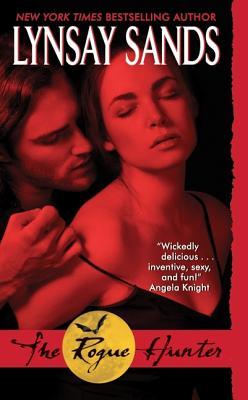 Review:
The Rogue Hunter was the first Lynsay Sands book I ever read. This was way back in high school when it definitely was not an age-appropriate book for me to be reading. I remember the boys that I would sit with at lunch stealing my books from Antonia and me, flipping to the particularly interesting sex scenes and reading them aloud until we could manage to steal the books back. While it was really embarrassing then, it’s a memory I’m rather fond of now. So, finally arriving at this book in the series had me excited.
I love this world that Sands has created. The interesting twist on the vampire origin story is one of my favorites. Science-based rather than magical. It’s my favorite. I think it’s such an interesting twist on the well-loved vampire.
The characters Sands creates characters that you can’t help but love. The Willan sisters are no different. It’s no secret that I love stories with siblings in them, so getting one with three sisters was a delight. I loved their interactions and clear love for one another. Sam is the love interest in this particular story, though I have a feeling we will be seeing her sisters again. I liked Sam because she was smart and ambitious. She’s a lawyer trying to make partner at her law firm. So, instead of enjoying her vacation she ends up on a search for the daughter of a wealthy client. I loved that this book acknowledged her past and that she was growing from that past. Being hurt by someone she thought she was going to spend the rest of her life with had left its mark and she was trying to work through and move past that.
Enter Mortimer. He was a little typical of the characters from this series. An aging immortal who is beginning to tire with life. Oh if only he had a lifemate. When he realized that might be Sam, he’s a bit put off. But only until he starts to get to know her. I liked that Sam was his lifemate, a girl that was not at all what he had pictured for himself.
The mystery was a little lame and didn’t occupy much of the story. With this, there also was a rather lack of rogue immortals. The title is The Rogue Hunter, which does fit as a title for Mortimer, but there wasn’t really even a rogue in the story which was a little disappointing. I have a feeling this will change in the next book though so I’m looking forward to that.
Overall, I liked this. It wasn’t my favorite, but it also wasn’t my least favorite. It was fun and enjoyable.

One thought on “Blogmas Book Review: The Rogue Hunter by Lynsay Sands”